Britons are bracing for taxes to be hiked as Rishi Sunak throw billions of pounds at easing the impact of coronavirus.

Some 71 per cent of the public believe they are likely to face paying more to the Treasury soon – with just seven per cent saying they don’t expect the bill to rise.

The poll for MailOnline also found that there is considerable support for contributing a bit more – but only if the money is pumped into the NHS.

The research by Redfield & Wilton Strategies comes after the Chancellor unveiled his latest huge bailout package as UK plc reels from the effects of the deadly disease.

The £30billion measures will see £1,000 bonuses for firms that bring back furloughed staff, and half-price meals out funded by the government.

But it takes the total committed in direct support and loans to £310billion, with annual borrowing now expected to hit £350billion this year – more than the running costs of all public services combined. 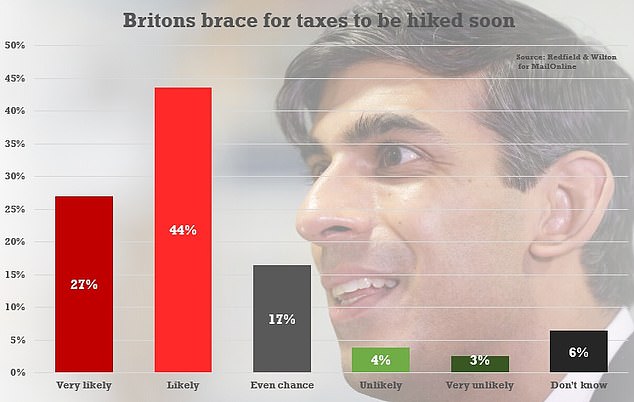 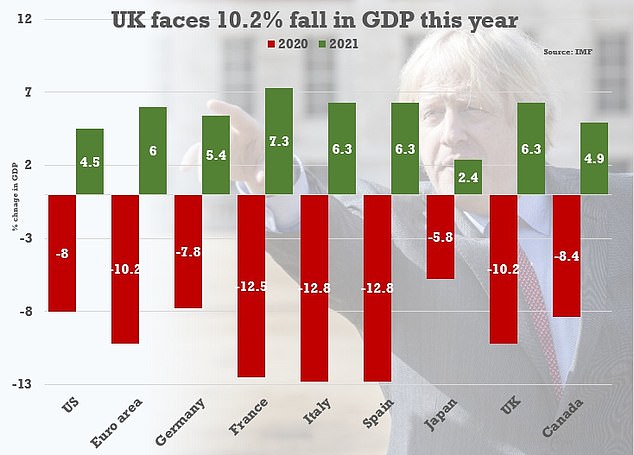 The respected IFS think-tank warned today that getting the UK’s £2trillion debt mountain under control will take ‘decades, and is likely to require the Treasury to raise an extra £35billion a year once the immediate crisis subsides.

Amid rising Tory anxiety about the government’s eye-watering bailouts – Mr Sunak admitted it was an ‘extraordinary’ amount of money, and gave a stark message that action will be needed later to return the finances to a ‘sustainable footing’.

But in a round of interviews, Mr Sunak insisted it was ‘right’ to pump cash into the economy now, dismissing claims the latest £30billion package unveiled yesterday is poorly targeted.

The poll carried out yesterday found 27 per cent believed it was ‘very likely’ they will have to pay more tax soon, while another 44 per cent said it was ‘likely’.

Some 17 per cent said there was an even chance, and just 7 per cent regarded it as not likely.

Nearly half – 48 per cent – said they would be willing to pay more tax if it was to increase funding for the NHS, although 34 per cent did oppose the idea.

Of those ready to contribute more, nearly three quarters said it should only be between zero and 5 per cent.

Another 24 per cent said they it should be between five and 10 per cent. Four per cent backed a higher figure.

Fresh doubts have been raised about the £1,000 bonus for businesses who bring back staff from furlough. It has emerged the top civil servant at HM Revenue & Customs refused to sign off on the policy without a written direction from Mr Sunak, warning that there was ‘uncertainty’ over whether it represented value for money.

The IFS also questioned why the £10 per head subsidy for people eating out was not being applied to takeaways, and said a VAT cut would potentially benefit thriving firms most. Temporarily axing stamp duty for most properties could merely have the effect of driving up prices, the think-tank suggested. 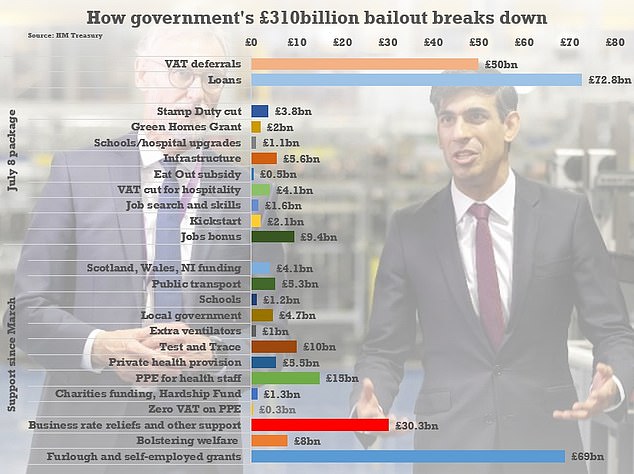 The £30billion package unveiled by Mr Sunak yesterday will see £1,000 bonuses for firms that bring back furloughed staff, and half-price meals out funded by the government

Mr Sunak insisted the jobs bonus will make a ‘big difference’, and begged Britons to ‘relearn’ the habits of eating out and shopping as lockdown eases – saying their willingness to do so will decide how fast the UK recovers from a ‘very significant recession’.

But he cautioned that jobs will be lost regardless of the interventions. ‘Is unemployment going to rise, are people going to lose their jobs? Yes,’ he said.

Pressed on the prospect of tax rises, Mr Sunak said: ‘Over the medium term the right thing for the economy will be to have sustainable and strong public finances. Of course I will make the decisions that are required, difficult though they may be, in order to return to that place.’