A mother and her 16-month-old daughter have been buried in the same grave after a missile attack on the Azerbaijani city of Ganja that killed at least 13 civilians, as fighting intensifies over the disputed of Nagorno-Karabakh region.

Zuleykha Shahnazarova and her daughter Madina Shahnazarli were killed overnight on Saturday, along with the father of the family, Royal Shahnazarov.

The couple’s other daughter, three-year-old Khadija Shahnazarli, survived the attack and was being treated in a hospital in the nearby city of Barda.

Azerbaijan accused Armenia of being behind the missile attack on its second-largest city, which also wounded dozens of sleeping people and destroyed a row of homes.

Armenia denied the allegation and in turn accused Azerbaijan of continued shelling on Stepanakert, the main city of Nagorno-Karabakh. It said the type of missile it was accused of firing does not have the range to reach Ganja. 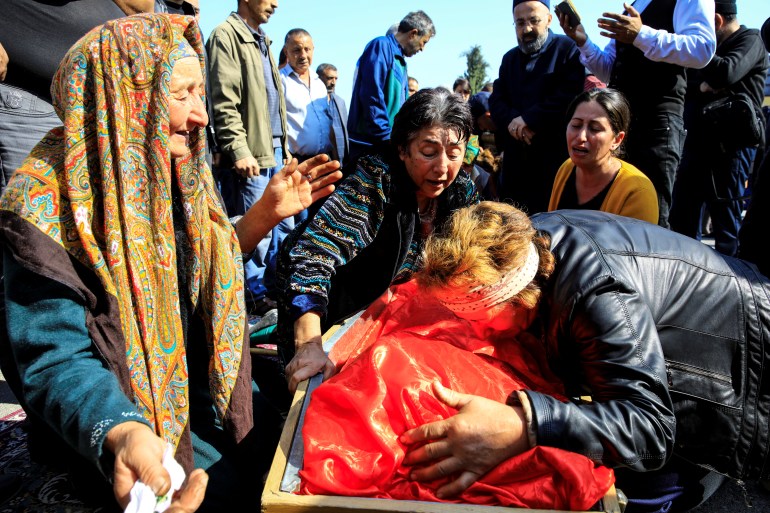 According to Hikmat Hajiyev, an assistant to Azerbaijani President Ilham Aliyev, “more than 20 houses were destroyed” in the attack.

Mushfiq Jafarov, a member of Parliament from Ganja, told Al Jazeera two children are among those killed.

“There are only civilians living here,” said Jafarov.

The attack on Ganja, which has a population of more than 300,000 people, came only six days after a missile struck another residential part of the city, killing 10 civilians and leaving many on edge.

“Fortunately my family and I were not at home,” Sevil Aliyeva, a resident from Ganja, told Al Jazeera. “My house is destroyed.”

Rescue workers are still searching through the rubble to find survivors.

Aliyev promised to take “revenge”, while Turkey, a close ally of Azerbaijan, condemned the attack and called it a “war crime”.

In a statement, Armenia’s foreign ministry said Azerbaijan’s “consistent attempts to extend geography of conflict, thus irreversibly undermining regional security should be condemned in the strongest terms. Any encroachment against the territorial integrity of the Republic of Armenia will receive an adequate response.”