A supporter of Sunak — with no experience at the Treasury: Tory big beast Jeremy Hunt is parachuted in as new Chancellor amid mini-Budget shambles

Jeremy Hunt was appointed Chancellor yesterday despite previously backing Rishi Sunak in the Tory leadership contest and calling for cuts to corporation tax.

The Tory big beast, who was culture, health and foreign secretaries over ten years before returning to the backbenches in 2019, was parachuted in by Prime Minister Liz Truss after she sacked Kwasi Kwarteng over the mini-Budget shambles.

Miss Truss telephoned Mr Hunt at 9.30am after concluding that Mr Kwarteng could not credibly continue in office.

An ally of the PM said: ‘She picked him because she likes him and thinks he’s incredibly capable. He’s a straight shooter and they agree on a lot – he’s a low-tax Conservative and he agrees with her on a lot of things, such as foreign policy and the need to invest in defence.’

Mr Hunt has himself run in two failed Tory leadership bids. The latest was this summer, when he pledged to scrap Mr Sunak’s planned rise in corporation tax and instead reduce the 25 per cent rate to 15 per cent on day one. At the time he said: ‘It’s not the most sexy of cuts but it just matters in terms of getting our economy moving.’

During his 2019 leadership bid against Boris Johnson, he proposed to slash the levy on businesses even further to 12.5 per cent. 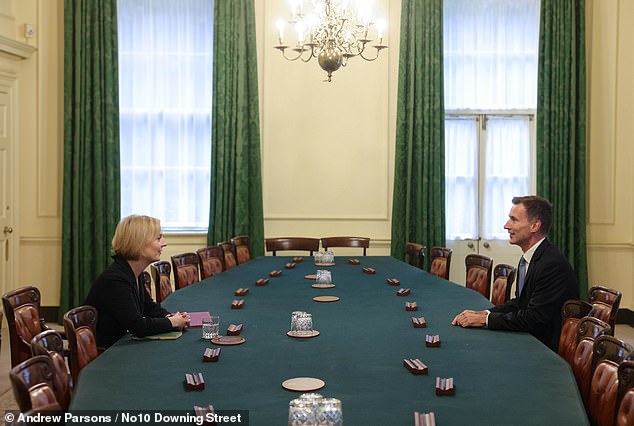 Jeremy Hunt was parachuted in by Liz Truss after she sacked Kwasi Kwarteng over the mini-Budget shambles. Pictured with the Prime Minister in the empty Cabinet Room at No10 after his appointment yesterday

But Miss Truss performed a U-turn on her plans to scrap the planned rise in corporation tax yesterday, meaning one of Mr Hunt’s first acts as Chancellor will be to increase it to 25 per cent.

His suitability for the role was questioned by some Tory MPs yesterday because he was one of the most prominent backers of Mr Sunak – who was chancellor under Mr Johnson – during the leadership contest against Miss Truss.

By contrast, Nadhim Zahawi and Sajid Javid backed the PM, have served in the Treasury and were seen as more obvious choices.

Despite serving in the Cabinet, Mr Hunt, 55, has no Treasury experience, which raises questions about whether the markets will react in a positive way.

Miss Truss telephoned Mr Hunt at 9.30am after concluding that Mr Kwarteng could not credibly continue in office. Pictured arriving at No10 yesterday

His backing of Mr Sunak is controversial among Mr Johnson loyalists, who believe the former stabbed the latter in the back by resigning from Cabinet and bringing the Government crashing down. They also take issue with Mr Hunt for running against Mr Johnson for leadership in 2019.

Like Miss Truss, Mr Hunt voted Remain in the 2016 EU referendum, but has since said he would vote Leave in any second poll.

His appointment will be seen as an attempt by Miss Truss to reach across the party after her decision to appoint only loyalists like Mr Kwarteng landed badly.

Mr Hunt backs raising defence spending – a key pledge by Miss Truss which commands majority support in the party – and broadly shares her vision of a low-tax, high-growth economy.

During the summer leadership contest, he criticised Mr Johnson’s levelling-up agenda for being ‘far too New Labour’ and overly focused on high-spend infrastructure rather than ‘wealth creation’.

He served as health secretary from September 2012 to July 2018. During this time, he faced criticism over his handling of the battle with junior doctors – in which the Government proposed changing contracts so that evenings and Saturdays would be considered ‘normal’ rather than ‘unsocial’ hours in a bid to deliver a seven-day NHS.

Despite the criticism, Mr Hunt went on to secure a funding increase for the NHS, totalling £20.5billion in real terms by 2023. 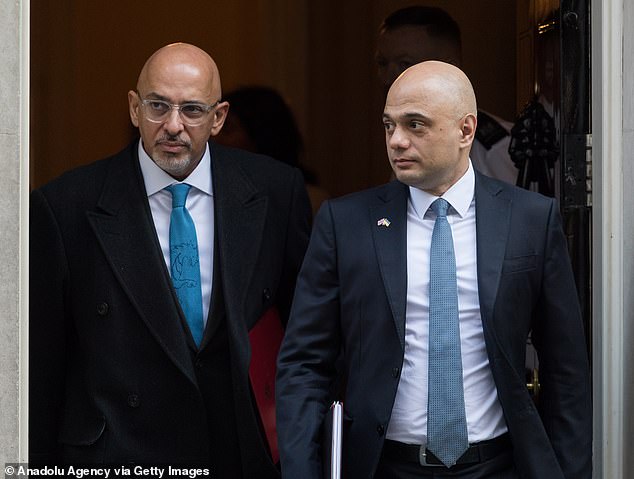 Nadhim Zahawi and Sajid Javid (pictured), who unlike Mr Hunt backed the PM, have served in the Treasury and were seen as more obvious choices

As foreign secretary under Theresa May between July 2018 and July 2019, he raised eyebrows with a gaffe during a meeting on an official visit to China. He told Chinese officials that his wife Lucia Guo – with whom he has three children – was Japanese although she was born in Xian in central China, before correcting himself.

He has been chairman of the Commons health committee since January 2020 and was frequently critical of Government policy during the Covid pandemic.

Elected as MP for South West Surrey in 2005, Mr Hunt loves dancing and even has his own sprung dancefloor at home, with party colleague Michael Gove once describing his moves as ‘something amazing’.