Washington: President Donald Trump's longtime lawyer and personal fixer, Michael Cohen, alleges in a new book that Trump made "overt and covert attempts to get Russia to interfere in the 2016 election" and that the future commander in chief was also well aware of Cohen's hush-money payoff to adult-film star Stormy Daniels during that campaign.

In the book, Disloyal: A Memoir, which was obtained by The Washington Post ahead of its Tuesday publication date, Cohen lays out an alarming portrait of the constellation of characters orbiting around Trump, likening the arrangement to the mafia and calling himself "one of Trump's bad guys". He describes the President, meanwhile, as "a cheat, a liar, a fraud, a bully, a racist, a predator, a con man". 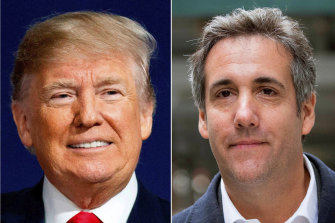 The memoir also describes episodes of Trump's alleged racism and his "hatred and contempt" of his predecessor, Barack Obama, the nation's only African American President.

Cohen acknowledges his own challenges as a credible narrator throughout the 432-page book, which is subtitled The True Story of the Former Personal Attorney to President Donald J. Trump. He describes himself as Trump's "designated thug" and discusses his felony convictions for lying to Congress and violating campaign laws in service to Trump. Cohen, who now advocates Trump's defeat in November, is still serving a three-year federal prison sentence for those crimes and for personal financial offences.

On Russia, Cohen writes that the cause behind Trump's admiration of Russian President Vladimir Putin is simpler than many of his critics assume. Above all, he writes, Trump loves money – and he wrongly identified Putin as "the richest man in the world by a multiple." 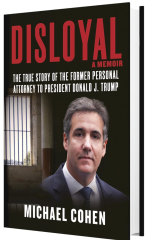 Trump loved Putin, Cohen wrote, because the Russian leader had the ability "to take over an entire nation and run it like it was his personal company – like the Trump Organisation, in fact."

Cohen also reveals new alleged details about the convoluted effort behind a National Enquirer report smearing Republican senator Ted Cruz. Cohen says Trump signed off on the baseless report to damage Cruz, one of his rivals in the 2016 Republican primary.

"It's not real, right?" Trump allegedly asked after being shown a photograph, which the magazine would claim depicted Cruz's father with Lee Harvey Oswald shortly before Oswald killed President John F. Kennedy in 1963.

"Looks real to me!" Cohen responded, according to the book, prompting Trump to laugh as he demanded that the story be run on the tabloid's front page.

"To say it would be a low blow would be an insult to low blows; can you think of another politician, ever, who would stoop this low?" Cohen writes.

White House press secretary Kayleigh McEnany attacked Cohen's credibility in a statement on Saturday: "Michael Cohen is a disgraced felon and disbarred lawyer, who lied to Congress. He has lost all credibility, and it's unsurprising to see his latest attempt to profit off of lies."

According to Cohen, Trump's sycophantic praise of the Russian leader during the 2016 campaign began as a way to suck up and ensure access to the oligarch's money after he lost the election. But he claims Trump came to understand that Putin's hatred of Democratic nominee Hillary Clinton, dating to her support for the 2011 protest movement in Russia, could also help Trump amass more power in the United States.

"What appeared to be collusion was really a confluence of shared interests in harming Hillary Clinton in any way possible, up to and including interfering in the American election – a subject that caused Trump precisely zero unease," Cohen writes.

Cohen's book, however, does not reveal much in the way of new details surrounding the investigations by former special counsel Robert Mueller and others into Russian interference in the 2016 election.

A senior White House official dismissed Cohen's commentary on Russia as baseless, arguing that numerous investigations found "no collusion" between the Trump campaign and Moscow.

Cohen asserts that another reason that Trump consistently praised Putin was to fulfil his long-held desire to slap his name on a proposed Trump Tower project in Moscow.

Cohen says the Trump Tower plans called for a 120-story building in Red Square, including 30 floors devoted to a five-star hotel with an Ivanka Trump-branded spa and Trump restaurants, and 230 high-end condominiums for Russian oligarchs and leaders.

The plan, Cohen adds, was to give the penthouse apartment to the Russian president for free, in part "as a way to suck up to Putin."

"The whole idea of patriotism and treason became irrelevant in his mind," Cohen writes. "Trump was using the campaign to make money for himself: of course he was."

Trump would later publicly insist that he had no business dealings with Russia. But Cohen writes extensively of his own efforts beginning in the fall of 2015 – several months after Trump had declared his candidacy – to make the Moscow project a reality.

The project fell to Cohen, he writes, because Trump's children all disliked Felix Sater, the colourful Russian American developer who served as the Trump Organisation's liaison with Russians interested in the project.

Nevertheless, Cohen says the whole family was aware of the project, even as candidate Trump publicly said he had no ties to Russia. Ivanka Trump, the President's daughter, who is now a senior White House adviser, even selected the proposed tower's high-end finishes, Cohen writes.

Ivanka and her lawyers have previously described her involvement in the Russia project as minimal, noting that she never visited the prospective site.

Cohen also describes in detail the partnership between Trump and David Pecker, the chief executive of National Enquirer parent company American Media and a longtime Trump friend, which included Pecker allegedly sharing the Cruz attack with Trump ahead of publication.

While many of Trump's critics would obsess over the possibility of Russian interference, Cohen writes, it was a purposeful "disinformation campaign" run by American citizens such as Pecker that was "by far the more insidious and dangerous development of the last cycle – and the most threatening for 2020". 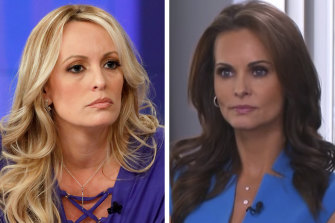 Stormy Daniels and Karen McDougal have each said they had sex with Donald Trump before he was President, and Cohen alleges that both were paid off.Credit:AP, CNN/Youtube

Cohen notes that the grocery-store tabloid targeted each of Trump's 2016 primary opponents in turn. He includes a document in the book, for instance, purporting to lay out the magazine's plan to take down Republican senator Marco Rubio.

The National Enquirer came through for Trump again later in 2016, agreeing to pay former Playboy playmate Karen McDougal, who claimed she had an affair with Trump, for her life story and then never running the story. Trump agreed to repay Pecker for the $US150,00 fee but never did, Cohen writes.

In the case of Daniels, Cohen writes that after Trump agreed to pay her $US130,000 for her silence, he strategist with Trump Organisation Chief Financial Officer Allen Weisselberg on how she could be paid without attracting notice.

Weisselberg suggested finding a Trump friend to put up the money, in the guise of paying for a membership to a Trump golf course or the club Mar-a-Lago, according to the book. When Cohen countered that perhaps Weisselberg should lay out the money himself, "Weisselberg went white as a sheet – like he'd seen a ghost," he writes.

Ultimately, Cohen made the hush payment himself, taking out a personal home equity loan to come up with the cash, all the while assuming Trump would probably fail to repay him as agreed.

"Stuck with the tab for Trump's sex romp in a hotel room in Utah a decade ago," Cohen writes. "This was the job I loved?"

Ultimately, however, Trump did repay Cohen – agreeing to reimburse him in $US35,000 monthly instalments after he had entered the White House as President, hiding the payments as fees for legal services and naming Cohen his personal attorney. Cohen asserts that Trump would get a tax break and legal services along with the money – meaning he would actually come out financially ahead for paying off the adult-film star.

The Trump Organisation did not immediately respond for comment Saturday.

In 2018, Cohen pleaded guilty to lying to Congress about the Trump Moscow project, as well as to violating campaign finance laws by paying Daniels to remain silent. Cohen told the court that he had been directed to make the payment to Daniels – and later reimbursed for the money – by Trump. He also pleaded guilty to tax evasion and lying to a financial institution, crimes that were unrelated to his work for Trump.

He was sentenced to three years in prison, which he had been serving at a federal facility in Otisville, N.Y., until he was allowed to leave prison and serve his sentence at home because of the coronavirus pandemic. Before he entered prison, he delivered dramatic public testimony to Congress, in which he apologised for his past lies and called Trump a "racist," "a con man" and "a cheat". Republicans mocked his self-professed turn to honesty, noting that he had previously defended Trump with similar gusto.

Beyond Russia's role in the 2016 elections and the Daniels payment, Cohen seeds the rest of his book with snippets of gossip from his time in Trump's orbit – some of it new, some of it well-known and much of it familiar.

He describes Trump insulting and dismissing some of his children, including Donald Trump jnr, his eldest son, and Tiffany, his youngest daughter.

Cohen writes that during the 2016 campaign, Trump was dismissive of minorities, describing them as "not my people." "I will never get the Hispanic vote," Cohen recounts Trump claiming. "Like the blacks, they're too stupid to vote for Trump."

Cohen describes Trump's obsessive hatred of Obama, including claiming that the only reason the former president got into Columbia University and Harvard Law School was because of "f—ing affirmative action." He also recounts Trump's "low opinion of all black folks" claiming that Trump once said while ranting about Obama, "Tell me one country run by a black person that isn't a s—hole. They are all complete f—ing toilets."

After South African President Nelson Mandela died in 2013, Trump said he did not think Mandela "was a real leader – not the kind he respected," Cohen writes.

Instead, Cohen writes that Trump praised the country's apartheid-era White rule, saying: "Mandela f—ed the whole country up. Now it's a shithole. F— Mandela. He was no leader."

"The cosmic joke was that Trump convinced a vast swathe of working-class white folks in the midwest that he cared about their well-being," Cohen writes. "The truth was that he couldn't care less."

Cohen also depicts Trump as being crude toward women, including inadvertently commenting on Cohen's then-15-year-old daughter as she finished up a tennis lesson: "Look at that piece of ass," Trump said, according to Cohen. "I would love some of that."

Cohen details a tawdry 2013 visit to a Las Vegas club, the Act, with Trump and Aras and Emin Agalarov – a Russian father-and-son oligarch duo. Cohen asserts that the group watched a debauched strip show that included one performer who simulated urinating on another performer, who pretended to drink it.

Trump's reaction to the show, Cohen writes, was "disbelief and delight".

Cohen's book ends with something of a plea – though one that requires the reader to trust Cohen's account of his time in the Trump orbit.

"You now have all the information you need to decide for yourself in November," Cohen concludes.