In Pittsburgh Monday, Biden went after Trump calling him a ‘toxic presence’ and accused him of ‘stoking violence in our cities’ to make Americans feel unsafe, while the Democrat called on Americans to ‘stand against violence – in every form it takes.’

Trump responded with a tweet – and then by posting a video clip of Biden tripping over his words. 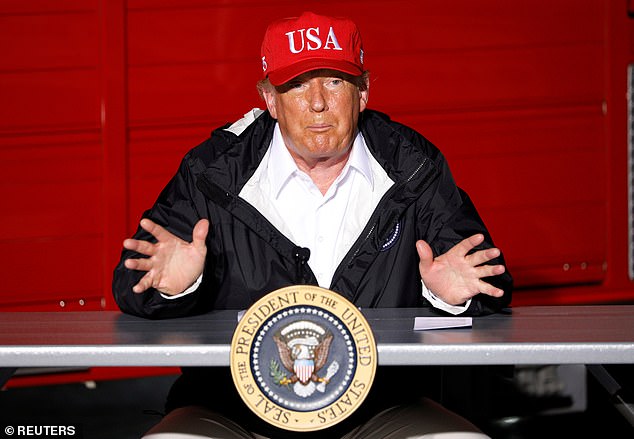 Trump reacted to Biden’s speech by saying the Democratic nominee was ‘blaming the police more than he’s blaming the rioters, anarchists, agitators and looters.’ Trump also said Biden couldn’t condemn because the ‘radical left’ would stop supporting him 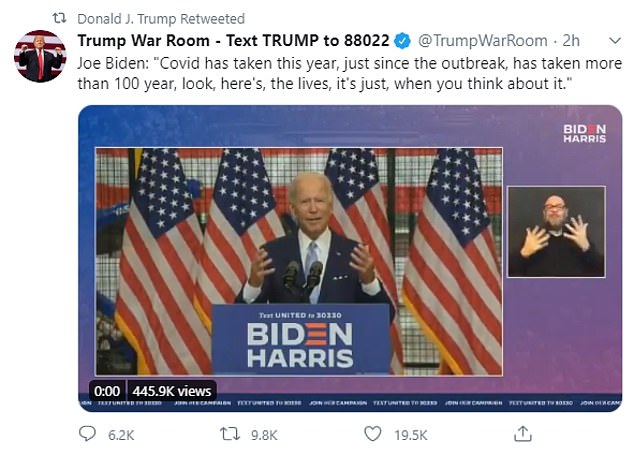 In a Trump retweet, the Trump War Room showed a brief clip of Biden in Pittsburgh stumbling over his words as he tried to make a point about the coronavirus death toll 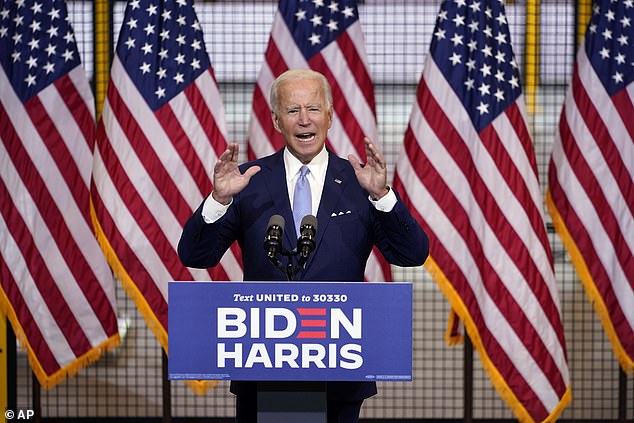 Biden appeared in Pittsburgh and spoke out against Trump’s leadership, while pushing back on some of the narratives the Trump campaign has tried to push about the former vice president

‘Just watched what Biden had to say,’ Trump tweeted. ‘To me, he’s blaming the Police far more than he’s blaming the Rioters, Anarchists, Agitators, and Looters, which he could never blame or he would lose the Radical Left Bernie supports!’

The president then retweeted a clip from the Trump War Room Twitter account, which showed Biden flubbing several lines of his speech, which he read from a teleprompter from Pittsburgh’s Mill 19, a converted steel mill.

‘COVID has taken this year – just since the outbreak – has taken, more than 100 year, look, here’s, the lives, it’s just, when you think about it,’ the clip shows Biden saying.

He ended up spitting out that COVID has taken ‘more lives this year than any other year.’

In a written transcript of the speech prepared for delivery, Biden was supposed to say, ‘COVID has taken more lives this year than any outbreak in more than 100 years.’

Trump and his campaign team have mocked the gaffe-prone Biden for months when he’s had verbal slip-ups, something Biden’s campaign tried to counter during the Democratic National Convention by having a New Hampshire youth speak about how Biden helped him recover from a stutter, a childhood problem Biden also had.

In his speech Monday, Biden tried to counter other ways Trump has tried to hit him.

‘You know me, you know my heart, you know my story, my family story – ask yourself, do I look like a radical socialist with a soft spot for rioters? Really?’ Biden said at one point.

Trump and his allies have tried to tie Biden to the so-called ‘radical left’ of the Democratic Party, including Sanders and ‘AOC,’ Rep. Alexandria Ocasio-Cortez.

Biden also mocked some of the campaign ads Trump has tried to run against him that show what ‘Biden’s America’ looks like, using images of protests gone awry over the past few weeks.

‘Trump and Pence are running on this – and I find it fascinating – “you won’t be safe in Joe Biden’s America,’ Biden said.