Russia says it has successfully launched a hypersonic Tsirkon cruise missile from a submarine for the first time.

The country’s defence ministry, which originally test fired the weapon – also known as Zircon – from a warship in July, said the second test, deployed in the Barents Sea, had hit its chosen target.

Low-quality video footage released by the ministry showed the missile shooting up from the submarine, lighting up the night sky and illuminating the water’s surface.

“The test firing of the Tsirkon missile from a nuclear submarine was deemed successful,” the ministry said.

Some western experts have questioned how advanced Russia’s new generation of weapons are, but recognised the combination of speed manoeuvrability and altitude makes them difficult to track and intercept.

Footage released in July of the country’s new advanced S-500 surface-to-air missile system appeared to have been deliberately blurred, making it harder to examine.

Tsirkon is intended to arm Russian cruisers, frigates and submarines.

He has emphasised that its deployment will significantly boost Russian military capability. 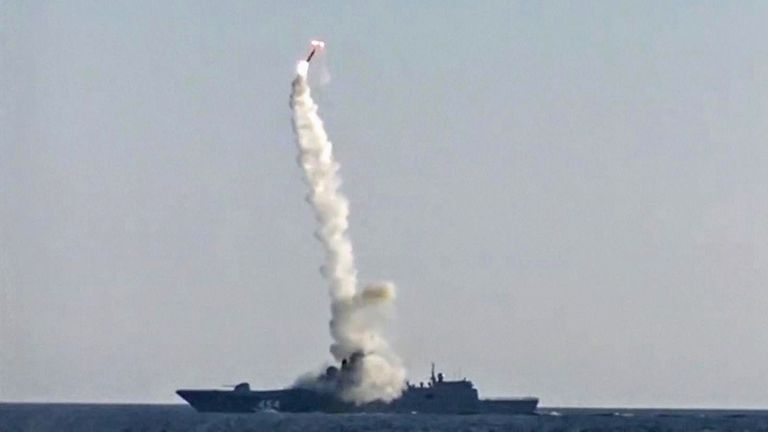 The Kremlin has made modernising the country’s arsenals a top priority amid the tensions with the West that followed Russia’s 2014 annexation of Ukraine’s Crimean Peninsula.

The leader announced a new array of hypersonic weapons in 2018 in one of his most aggressive speeches in years, saying they could hit almost any point in the world and evade a US-built missile shield.

In December 2020, Mr Putin said in his annual news conference that Russia is developing the hypersonic weapons in response to a new US-triggered arms race.