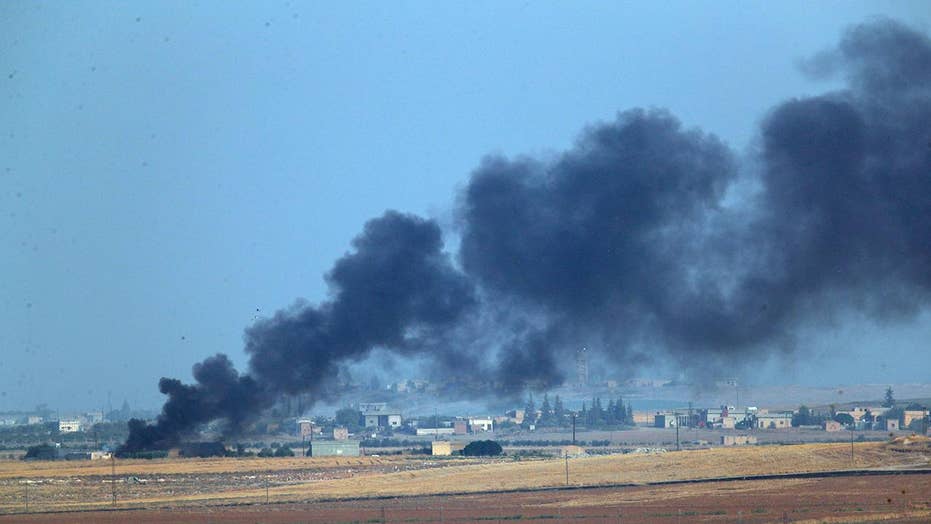 The United Nations reports tens of thousands of people are trying to escape the violence; Steve Harrigan reports from Erbil, Iraq.

Turkish artillery rounds landed near U.S. forces in northern Syria outside the city of Kobane on Friday, but no American troops were harmed, a U.S. official tells Fox News.

Officials say it was not immediately clear who fired the artillery round or how close the projectile was to troops on the ground.

“There has been no activity since the explosion,” the official added.

TURKEY'S SYRIA INVASION: MEMBER OF US SPECIAL FORCES SAY, 'I AM ASHAMED FOR THE FIRST TIME IN MY CAREER'

Turkey's defense ministry said late Friday that its forces struck a position held by Kurdish-led forces in Kobane after an attack with machine guns and mortars on one of Turkey's border posts. The statement said the Turkish border posts were targeted from a Syrian Kurdish position about 0.6 miles southwest of a U.S. observation post.

Turkey added that its army took every precaution to ensure no damage to the U.S. post and stopped striking the Kurdish target after communicating with the U.S.

Earlier Friday, Army Gen. Mark Milley, the new chairman of the Joint Chiefs of Staff, said Turkish forces should know what areas to avoid bombing in their offensive against Kurdish fighters in northern Syria because they know where all of the roughly 1,000 U.S. troops in the area are located.

“The Turkish military is fully aware down to explicit grid coordinate detail of the locations of U.S. forces,” Milley said.

Fighting continues to rage between the U.S.-backed, Kurdish-led Syrian Democratic Forces (SDF) and Turkish forces days after President Trump pulled troops from the northeast border of Syria, a move widely seen as an abandonment of Kurdish troops.

Friday marked the third day of Turkish military operations against the Kurds along the Syrian border, which has been bombarded with shellings and warplanes. The United Nations estimated the number of displaced at 100,000 since Wednesday, saying that markets, schools and clinics also were closed. Aid agencies have warned of a humanitarian crisis, with nearly a half-million people at risk in northeastern Syria.

Turkey said it captured more Kurdish-held villages in the border region, while a hospital in a Syrian town was abandoned and a camp of 4,000 displaced residents about 7 miles from the frontier was evacuated after artillery shells landed nearby.

U.S. troops conducted a military patrol about 19 miles south of Tal Abyad, in their first visible deployment since Turkey launched the operation. A U.S. official, speaking on condition of anonymity to brief reporters, said the patrol was not in support of operations against the Turkish offensive.

U.S. Defense Secretary Mark Esper said Friday Washington is "greatly disappointed" by the offensive, which has badly damaged already frayed relations with NATO-ally Turkey. In a strong statement of support for the Kurds, Esper insisted that "we are not abandoning our Kurdish partner forces, and U.S. troops remain with them in other parts of Syria."

Plumes of black smoke billowed from the town as Turkey continued bombarding the area in an offensive that was progressing "successfully as planned," the Turkish Defense Ministry said.

Turkish troops and their allied Syrian opposition forces have advanced up to 5 miles into Syrian territory, Turkish Vice President Fuat Oktay told TRT World television. Turkey has said the military intends to move 9 miles into Syria and that its operation will last until all "terrorists are neutralized."

The Kurdish-led force said 22 of its fighters were killed since Wednesday.

The Kurdish militia has fired dozens of mortars into Turkey in the past two days, including Akcakale, according to officials in two provinces on the Turkish side. They said at least 17 civilians were killed in the shelling, including a 9-month-old boy and three girls under 15. On the Syrian side, seven civilians have been killed since Wednesday, activists said.

The Syrian Kurdish forces had been holding more than 10,000 ISIS members, but they said they are being forced to abandon some of those positions to fight the Turkish invasion.