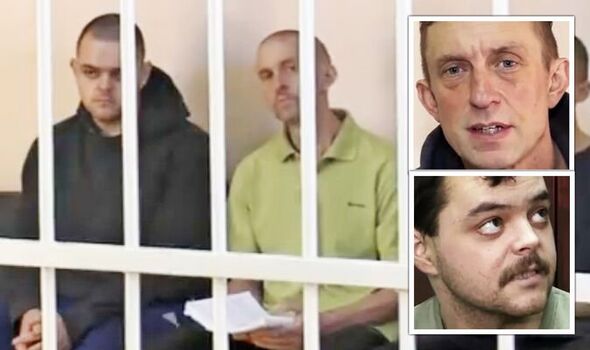 The two British men, who were detained in April, are reportedly charged with being mercenaries. They had both been in the country since 2018 and insist they were legitimately serving with Ukraine’s military – so should be protected as prisoners of war by the Geneva Convention. The UK has made clear they are prisoners of war entitled to immunity and should not face prosecution for taking part in hostilities. Deputy Prime Minister Dominic Raab said on Monday the British Government expected “the laws of armed conflict to be represented” and the Foreign Office would make “all the representations”. The court, in one of Ukraine’s breakaway regions, is not internationally recognised.

The Russian-owned news agency RIA Novosti said on Telegram: “The Supreme Court of the DPR passed the first sentence on mercenaries – the British Aiden Aslin and Sean Pinner and the Moroccan Saadun Brahim were sentenced to death, RIA Novosti correspondent reports from the courtroom.”

The three men appeared in court for the first time on Wednesday.

The president of the Donetsk People’s Republic, Denis Pushilin, has accused the men of “monstrous” crimes, such as trying to seize power and crimes against groups of people.

The family of Mr Aslin, a former care home worker, said on Tuesday it was a “very sensitive and emotional time” and that they were working with the Ukrainian government and UK Foreign Office to try to free him.

They said in a statement: “Aiden is a much-loved man and very much missed, and we hope that he will be released very soon.”

The 28-year-old joined Ukraine’s armed forces as a marine in 2018. He had previously also fought with Kurdish armed units in Syria against the so-called Islamic State.

Engaged to marry a Ukrainian woman, he had applied for citizenship in the country.

He was filmed in April saying he had been captured while defending Mariupol, his adopted city.

His family, from Bedfordshire, stressed at the time he was “not a volunteer nor a mercenary, but officially serving with the Ukrainian army”.

They added: “Shaun enjoyed the Ukrainian way of life and considered Ukraine as his adopted country over the last four years.

“During this time, he met his Ukrainian wife who is very focused on the humanitarian needs of the country.

“Shaun is a funny, much-loved, well-intentioned husband, son, father, brother and friend to many.”

According to Mr Pinner’s family, his three-year contract with the Ukrainian military was due to expire at the end of the year and he was planning to enter a humanitarian role in the country.

He had reportedly served in the British Army for nine years.