The other was held for throwing a bottle at a dustbin lorry.

Both were arrested in the early hours of this morning.

They are now set to miss England’s Nations League play-off match against Switzerland at 2pm.

Police sources expect the pair to be hauled before a court today. 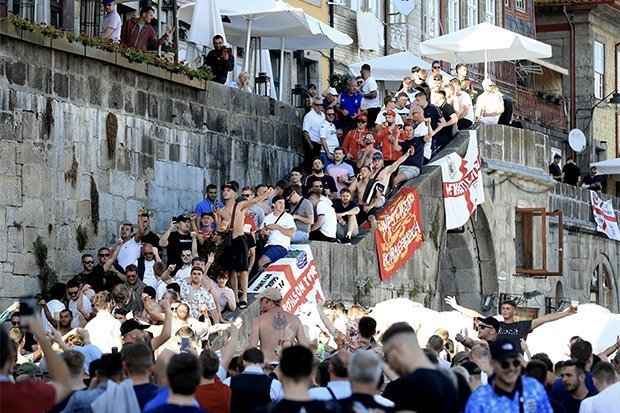 A spokesman for Portugal’s Police Force (PSP) said a 23-year-old Brit was held just after midnight in Largo de Sao Domingos at the end of a street called Rua das Flores.

The second man – a 24-year-old – was held around 1.40am in Liberdade Square where riot police charged England fans last Wednesday evening and arrested two supporters who were later fined in court.

The spokesman confirmed: “Police spotters in an unmarked car saw the first man threw a bottle at a bin lorry and arrested him.

“The second man was held around 1.40am in Liberdade Square. He is a 24-year-old Englishman who punched the roof of an unmarked police car while he was with a friend and dented it.

“The officers got out of the vehicle and identified themselves and he reacted violently with his fists, assaulting them.”

The spokesman said: “There have been no other arrests anywhere else where the England fans are.

“We are expecting between 8,000 and 10,000 fans in Guimaraes for today’s match and there is no trouble to report.”