My turkeys won’t be anybody’s dinner this Christmas – they’re far too talented! Mother, 57, reveals how her two pet birds can tell colours apart, respond to commands like a dog… and even play the keyboard

Her only previous experience with turkeys was eating them for Christmas dinner.

But Debi Monk has vowed against any of that in the future after hatching a pair in her dining room.

The 57-year-old podiatrist believes Flower and Gobbledygook are the UK’s cleverest turkeys, thanks to her reading them bedtime stories.

She claims the birds can tell different colours apart, respond to commands like a dog and create music. 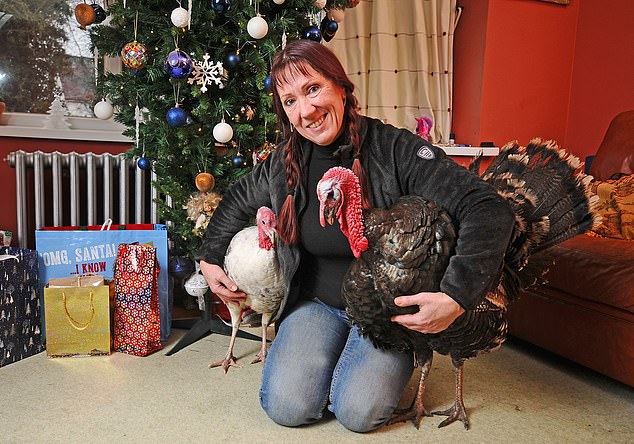 She said: ‘Gobbledygook can play the keyboard, and they can both kick a ball on command, ‘lie down’ and ‘give a foot’ like when you ask your dog to ‘give a paw’.

They can also recognise colours – if I say ‘peck red’ they peck red.’ Mrs Monk, from Bromsgrove, Worcestershire, said she was delighted when Flower and Gobbledygook hatched in July.

She later entered the birds into an all-animals agility competition, where they were awarded second and third place rosettes. 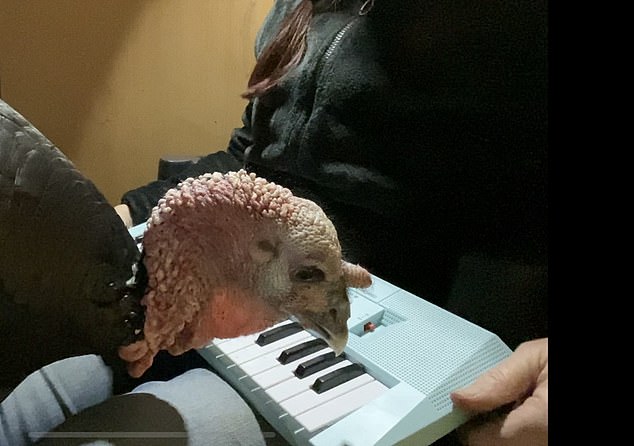 Mother-of-three Mrs Monk added: ‘I definitely will not be having turkey at Christmas ever again

She said: ‘They are intelligent, sensitive and love to have their armpits tickled. I believe you can train any animal to some extent if you just give it the time.’

Mother-of-three Mrs Monk added: ‘I definitely will not be having turkey at Christmas ever again. It’ll be a nut roast for us this year!’