The mercury is expected to plummet below freezing from Friday, with the low temperatures sparking snowfall across much of the country. The latest weather charts show Scotland, northern England and Wales are braced for the worst of the wintry conditions.

At 6am Scotland is covered by a snow risk of between 70-100 percent, while Northern Ireland has up to a 90 percent risk of snowfall.

Parts of Wales and Northern England have a more moderate snow risk, of between 30-75 percent.

As the day progresses, the snow risk intensifies across England and Wales.

The chart, valid for 9pm, shows huge swathes of the country turn red and white – indicating the high snow risk. 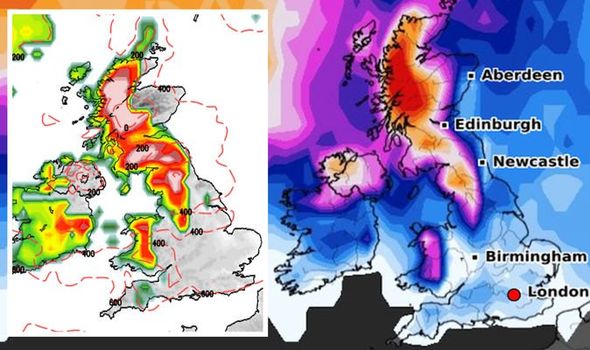 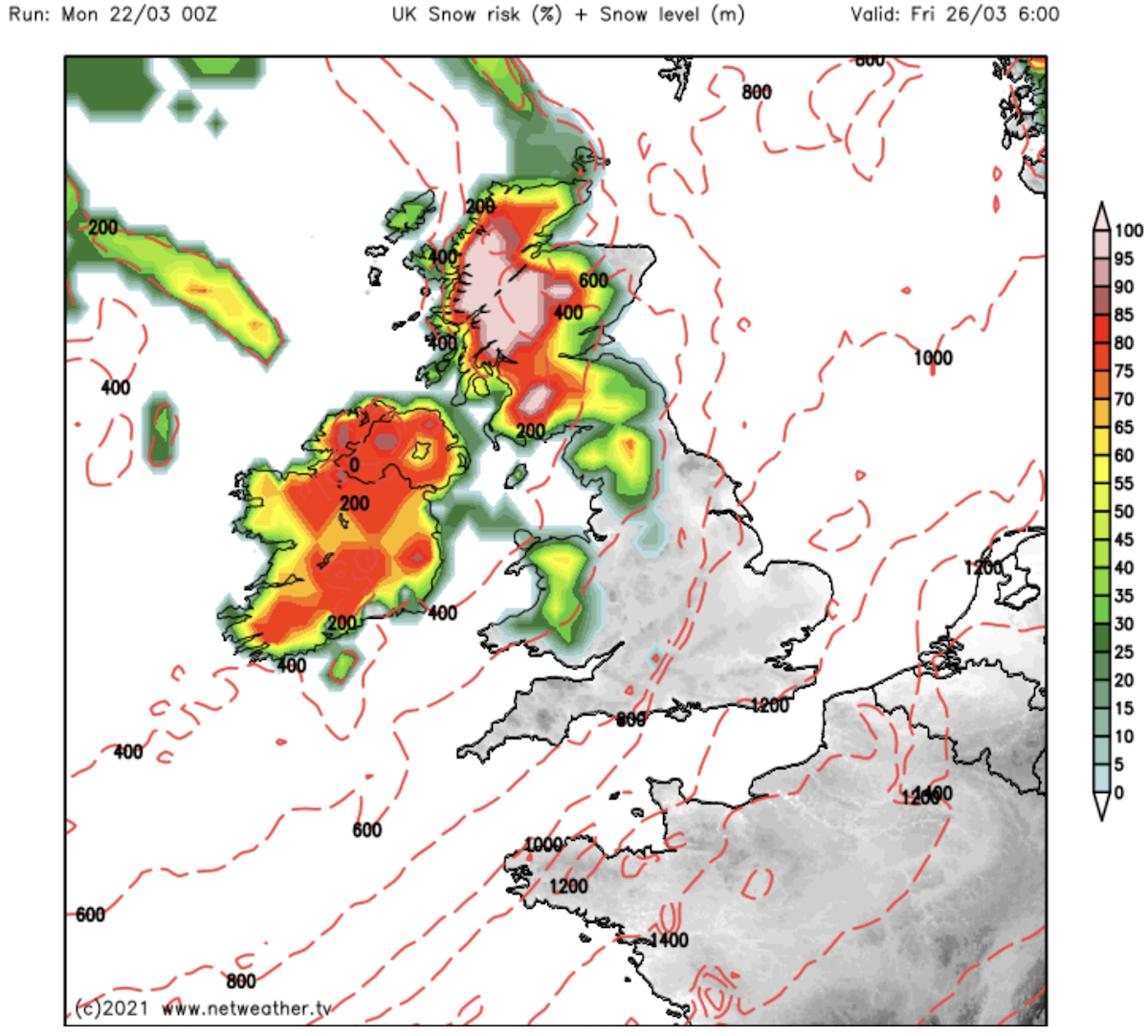 Through Saturday the snow risk remains confined to Scotland and northern England, before moving further south again by Sunday morning.

At 6am the snow risk chart shows Scotland, northern England, Wales and Northern Ireland covered by a high snow risk.

The chance of snow begins to ease as the day goes on.

At midnight on Saturday, the chart expects much of Scotland and northern England to see snowfall, as shown by the red and orange colourings.

JUST IN: Britain to bake in ‘early summer’ weather as temperatures sky rocket 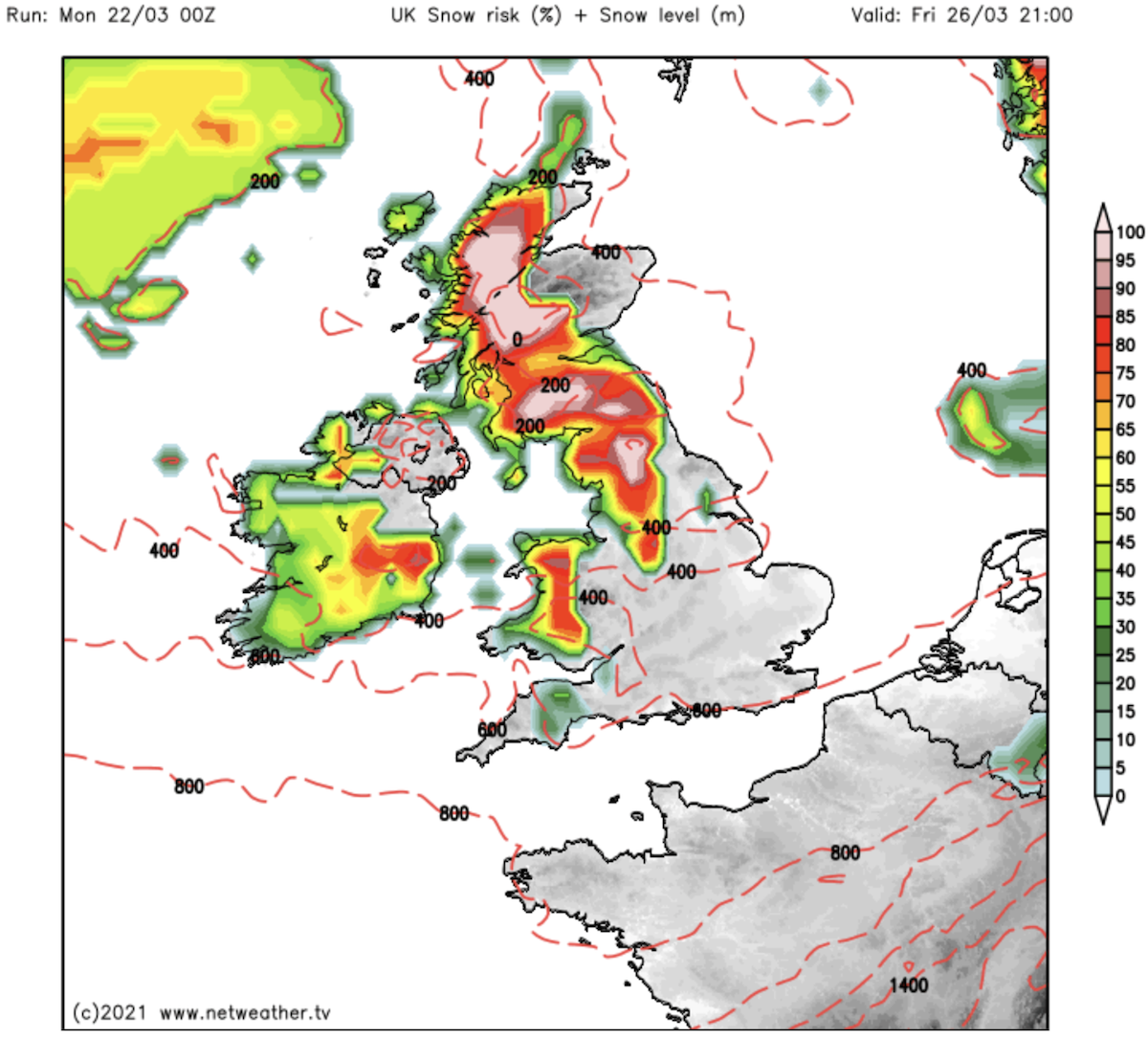 Northern Ireland and Wales has up to a 60 percent chance of snow, while the rest of England has a snow risk of up to 30 percent.

The snow forecast for this weekend is set to coincide with plunging temperatures.

Temperature charts valid at 12pm on Friday shows the mercury will struggle to rise above 7C across the whole of the country.

Scotland and Northern Ireland will see colder temperatures, with lows of -2C forecast. 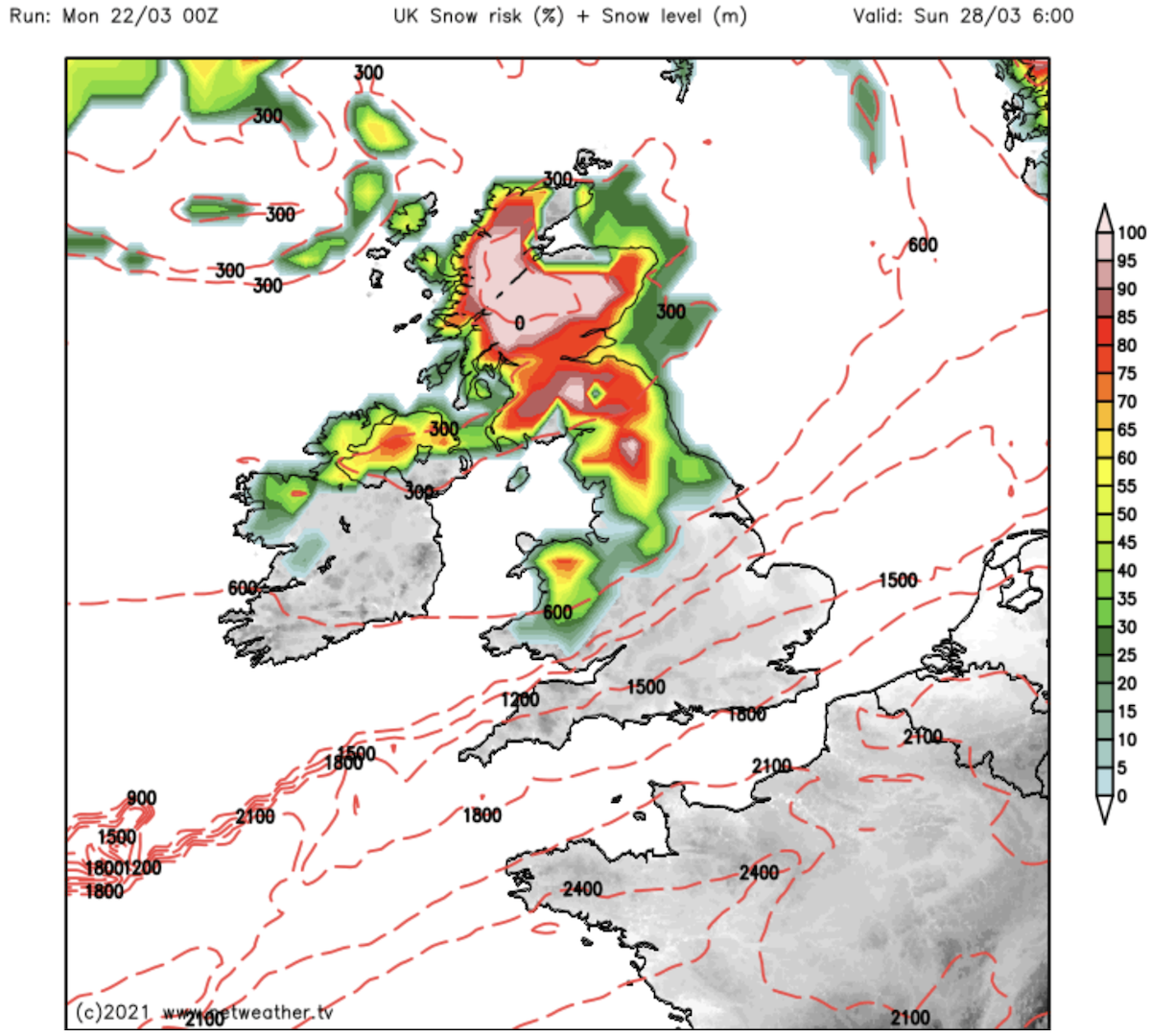 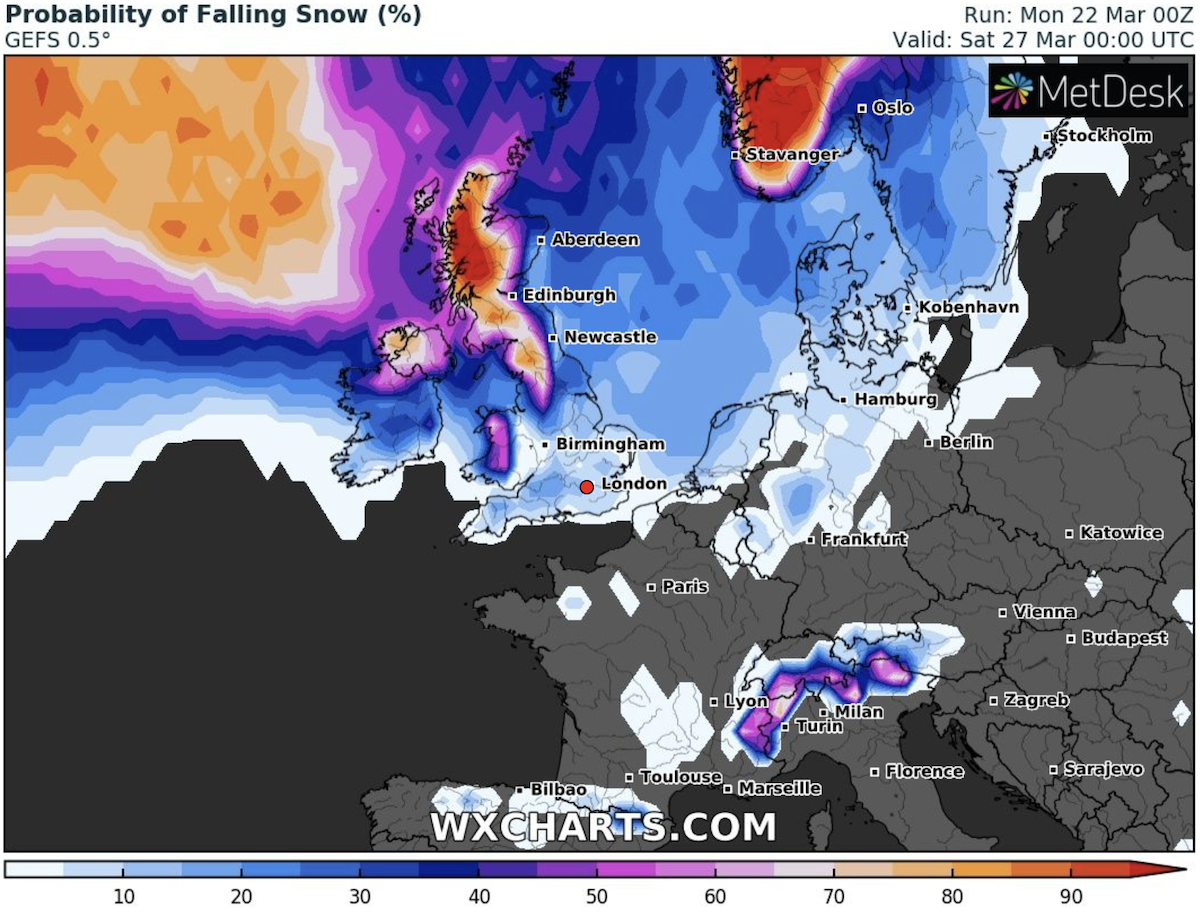 Saturday morning is set to be even colder, with -4C forecast in Scotland at 6am.

Northern England, parts of Wales and Northern Ireland will see the mercury dip below freezing.

The rest of the country is also set for cold temperatures, with highs of 5C forecast.

The Met Office said the weekend is set to be cold, with wintry showers possible. 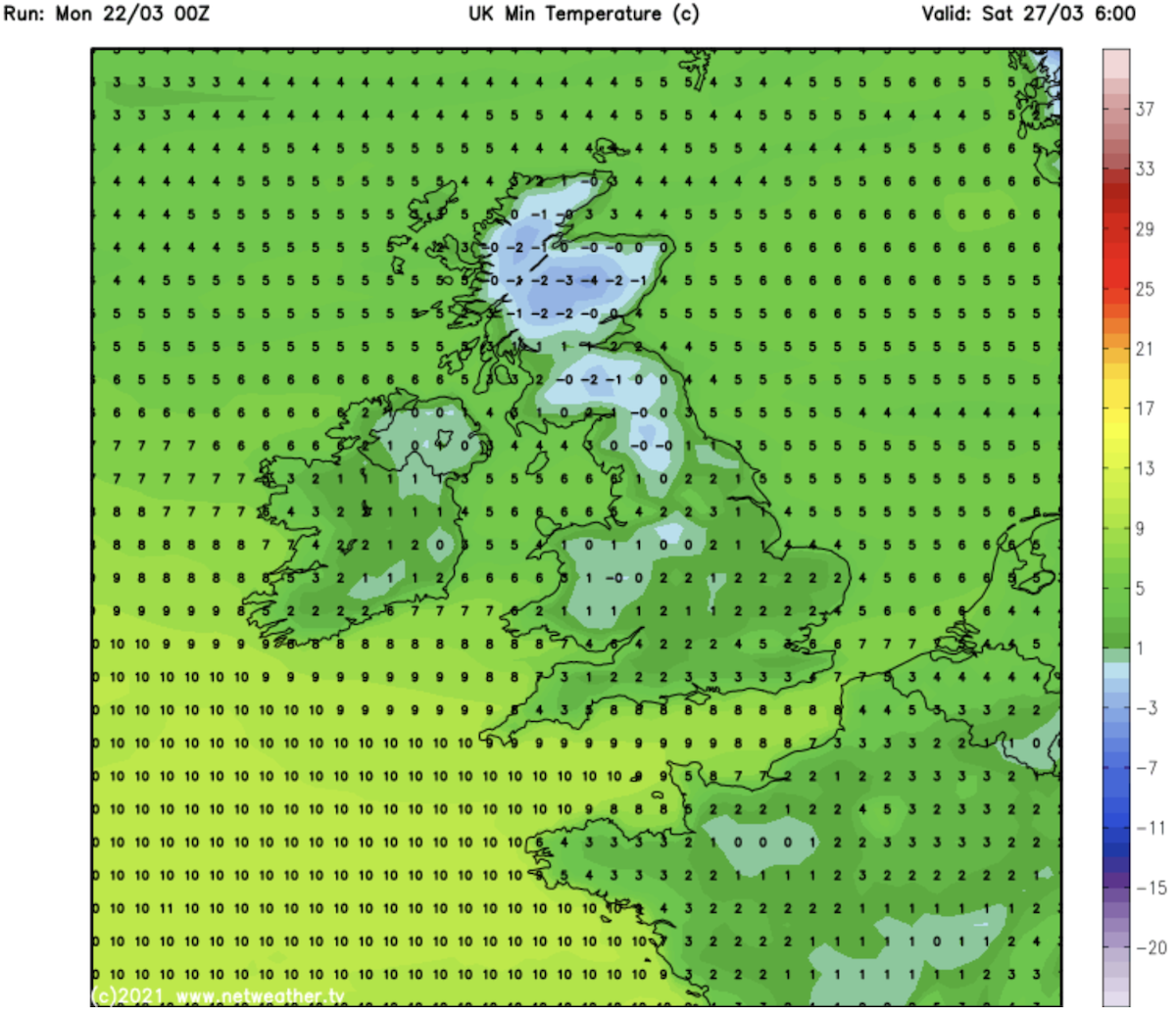 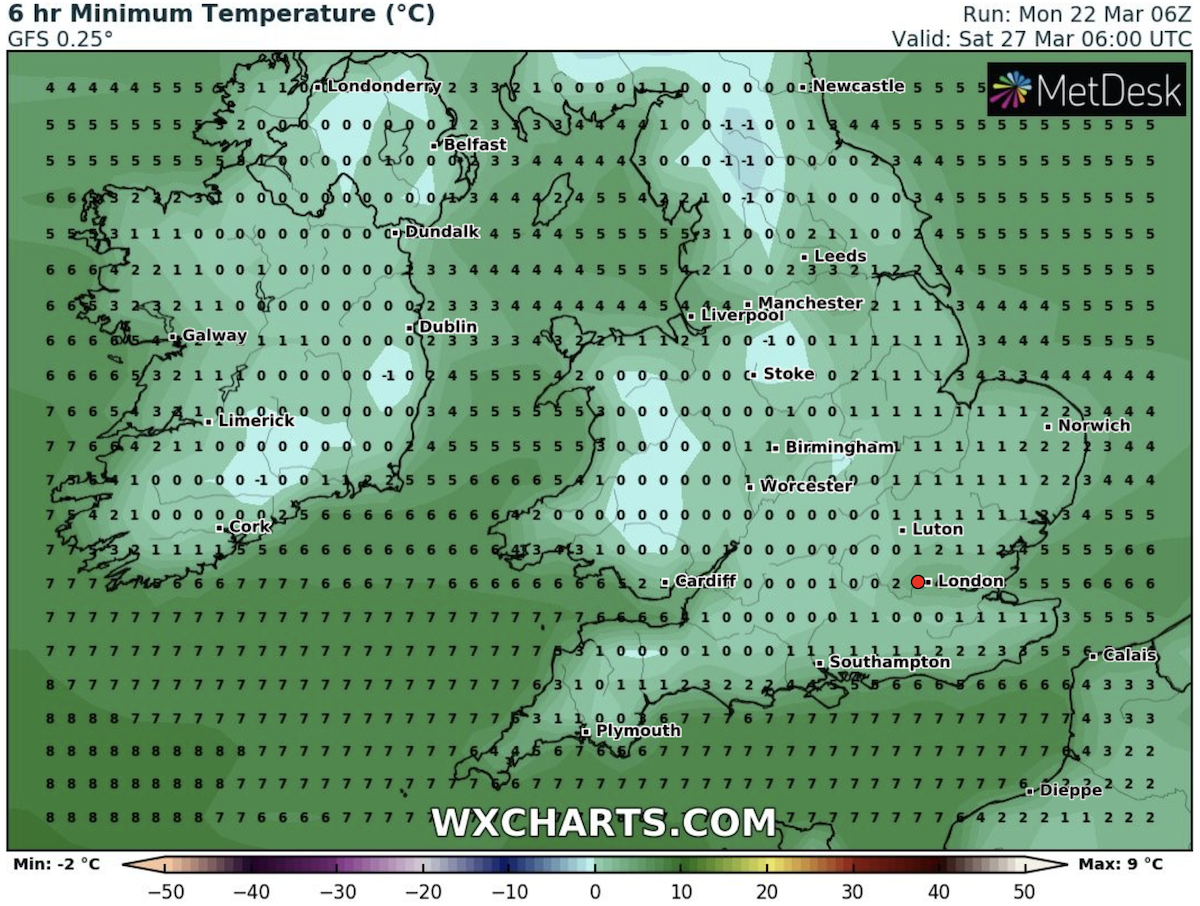 They said: “A cold interlude on Friday, with rain, showers and strong winds affecting most of the UK.

“Some of these showers could turn wintry for a time, especially over higher ground but not confined to.”

BBC forecasters added: “From Friday and into next weekend, it will likely turn a bit stormier as low pressure drifts nearer to the country.

“This will bring some stronger winds and scattered showers with a few pulses of heavier rain.

“Wintry showers are likely for parts of Scotland too as some colder air from Iceland arrives from the northwest.

“Confidence is high for the broad weather pattern next week.”