The video, filmed by local residents on Monday morning, was shared on social media after families rushed on Twitter to find out whether anyone else had seen the rare phenomenon. The skies above North Staffordshire repeatedly flashed and lit up after a night of heavy snow showers.

Two videos show taken at around 6.20 am and around a minute later show the sky lighting up an eye-dazzling rose and violet-coloured hue.

The phenomenon is believed to be called ‘thudersnow’ – a rare form of thunderstorms with lightning occurring during a snow showers rather than with rain.

Mr Jones told StokeonTrentLive: “I think it was thundersnow although I didn’t hear any thunder.

“It happened again about 60 seconds later in the same place.” 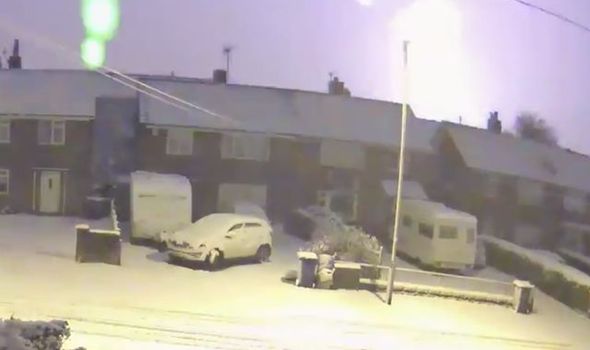 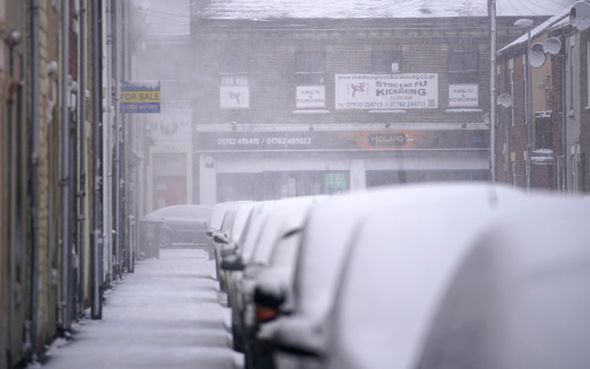 Other residents across Kidsgrove, Goldenhill, Packmoor, Talke and further afield, took to social media to express their wonder.

One said: “I’m glad it wasn’t just me that saw them. I was looking outside when it happened but know idea what it was.”

Another added: “I was up at 5am watching the falling snow – I watched it for over an hour. And then at about 6.20am I’ve seen large flashes of pinkish colour.

“I thought it was lightning as although it was snowing it looked as if they was slight drizzle mixed in.”

Snowfall has hit some parts of the UK which are gripped by a cold snap following days of stormy conditions.

The Met Office, which has yellow weather warnings for snow and ice in place across much of England and Wales, described it as “a cold and frosty start” to Bank Holiday Monday.

Heavy snowfall prompted Gloucestershire Police to warn members of the public to take care and to “only go out if it is essential to do so”.

The force tweeted: “Heavy snow is starting to fall in the rural parts of the county. This will cause delays on the roads.”

It had a number of reports of snow around the county causing disruption, which was hampering people in the Forest of Dean and the A417 around Birdlip.

In the West Midlands, Dudley Zoo said it would be closed on Monday due to the snow.

The weather warning says there is the potential for patches of snow across parts of England and Wales with 5-10cm falling in a few places, such as higher ground in Wales above 200 metres.

It adds: “As well as snow, widespread ice may also be an issue, especially where treatment has been washed off road surfaces.”

Parts of the East Midlands, East of England, London and the South East, the North West, South West, West Midlands and Wales are covered by the warning, which runs until Monday at 6pm.

The yellow warnings from the Met Office advise of the potential for injuries from icy surfaces and delays to trains and road transport.

With another cold day in store on Tuesday, the Met Office also issued a yellow weather warning for snow and ice as icy surfaces may form across parts of the UK overnight.

Wintry showers could see up to 10cm of snow over the Pennines.

Treacherous conditions were predicted if thawing snow turns to ice.