That’s according to senior meteorologist at British Weather Services, Jim Dale, and interactive maps which show scattered downpours moving in from the east. Mr Dale said parts of the north and Scotland will be subjected to storms from tomorrow, August 2. Speaking to Express.co.uk, he said stormy weather will hit “northern parts of England tomorrow, north-west England and south-west Scotland”, but added: “In the main it’s rain opposed to thunderstorms. If there are any storms tomorrow then they will be few and far between, morning more likely than pm,” he said.

This also feeds into a prediction WX Charts, whose maps show heavy rain dominating much of Scotland from 9am tomorrow.

Stornoway, Fort William and Portree are among the places blanketed by the rain along with Carlisle and other parts of Cumbria.

The maps show Cumbria will cop the brunt of the rainfall in the early hours, with up to 10mm of rain falling at around 6am.

But Mr Dale said this weather will be short lived as a high pressure system from the Azores moves in by Friday, bringing in its wake a series of hot days next week. 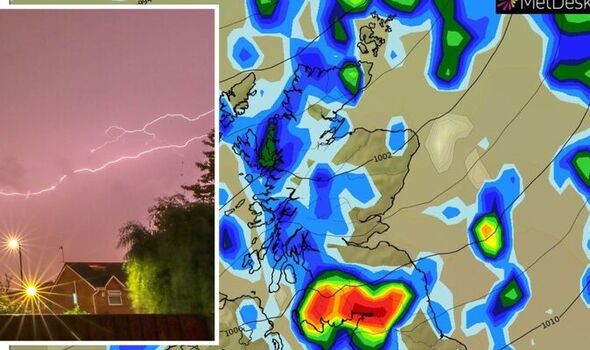 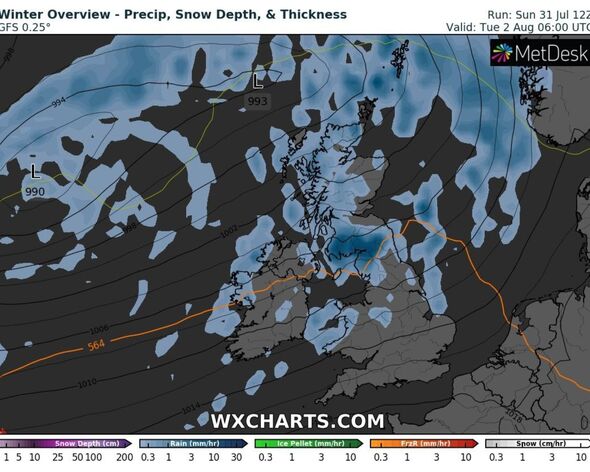 He added: “The heat builds next week, but the drought in the south continues for more than 10 days.”

Temperatures could hit 32C next week, with thermometers shooting up from the late 20s to early 30s by Wednesday.

While this heat dominates the south and central parts of England, by Thursday, August 11 a spike in temperatures will become more widespread.

In Birmingham the top temperature is set to hit 28C, with Newcastle and parts of Scotland hitting 25C. 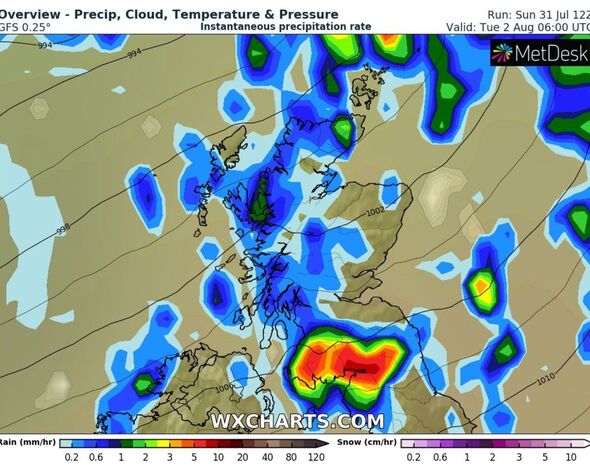 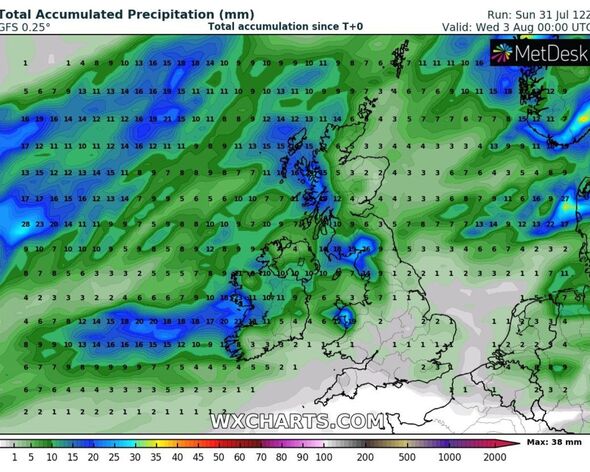 The Met Office UK forecast for the first fortnight of August says: “Most places are likely to see mainly settled weather at the start of this period, with a mix of cloud and sunny spells across the country.

“Some precipitation in the form of light showers may possibly affect northern and some central areas on Friday.

“These showers may continue through the weekend but are then more likely to be confined to northwestern areas.

“Temperatures near normal across the south but feeling cooler in northern regions and during the nights.

“The dry weather is likely to persist through the later part of this period, becoming more widespread in the north.

“Still the chance of some periods of organised rain in the north at times.

“Temperatures become widely near normal, but perhaps warm or very warm in the south.”