Temperatures are expected to soar this week as forecasters predict more than 30C in southern parts of Britain. The “last blast of summer” – as the weather system approaching the UK has been called – is caused by “tropical continental air”.

Met Office forecaster Bonnie Diamond said sweltering temperatures are caused by a “tropical continental air pushing up from a southerly direction in combination with light winds.”

The plume of heat will embrace most parts of England and Wales.

He said: “Along with the dry and sunny weather, southern areas of the UK will see temperatures rise due to a combination of high pressure and warm air from the continent. 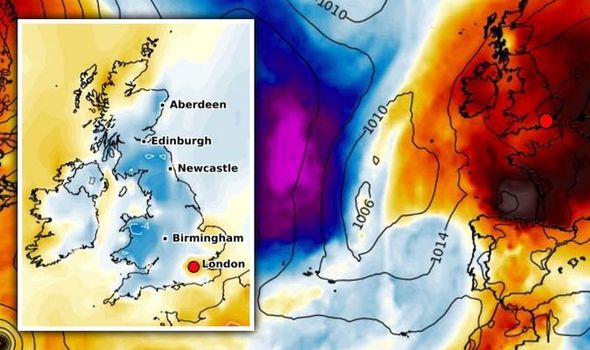 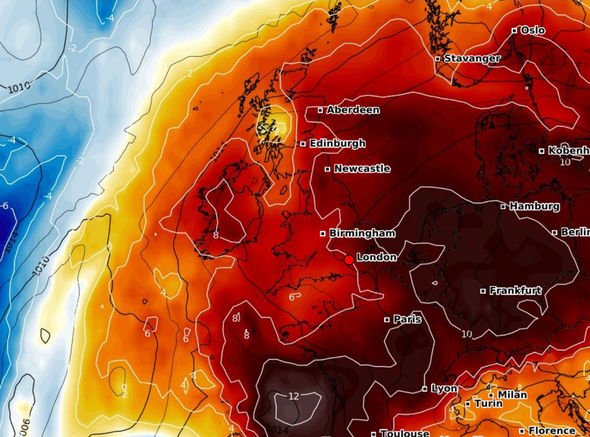 “On Sunday temperatures across central and southern England will reach into the low to mid 20’s Celsius and it’ll turn warmer still as we start the new week, with temperatures possibly reaching around 29 or 30 Celsius in the south east early next week.”

Scotland, however, might miss out on the scorching heat.

Tonight cloudy outbreaks of rain is forecast for northwest Scotland.

The rainy conditions will remain in place over far northwestern Scotland on Monday. 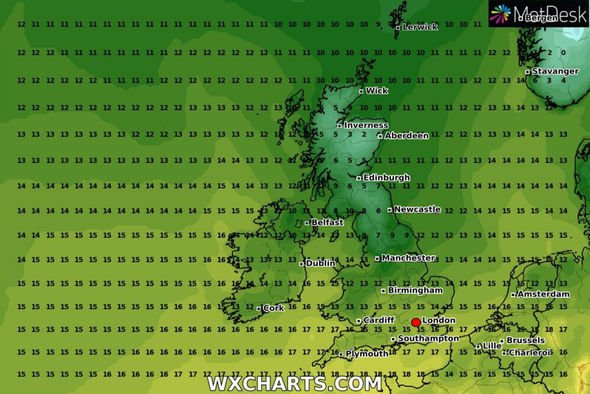 In its outlook from Tuesday to Thursday, the Met Office said most places will stay “dry and warm”.

The forecast read: “Many places dry and warm on Tuesday, hot across the southeast.

“A few showers possible in the north and west.

“Turning cloudier and cooler from the north Wednesday and Thursday.”

However, the balmy weather is not expected to last, and weather maps show temperatures could dip to 2C in the first Autumn freeze of the season.

Weather maps from WXCHARTS show most of Scotland will have temperatures of 2C on Thursday, September 17, while northern England can expect 8C.

The forecast said: “There is potential to see more unsettled conditions becoming more widespread across the UK at times, bringing spells of wet and windy conditions with temperatures falling closer to average.” 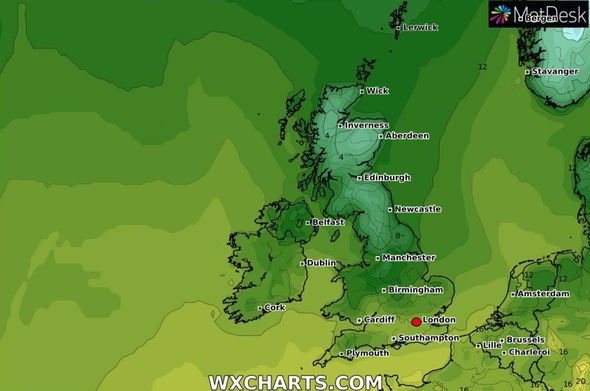 In its forecast from September 27 to October 11: “The UK is likely to see alternating periods of relatively settled weather, bringing an increased risk of mist and fog in the morning, and more unsettled conditions, which would see typical autumnal wet and windy weather.

“Overall, temperatures are expected to average out during this period around or slightly above the normal.

“However, variations are to be expected as a result of the shifting weather systems, giving potential for both warm and cold spells.”