Britain has two flood warnings in place as showers will hit parts of England and Wales. The first warning is in place for rivers in the Gwendraeth Fach and Gwedraeth Fawr catchments in Wales as river levels have risen in response to heavy showers yesterday afternoon and more overnight. Website Flood-Warning writes: “The combination of ground conditions, existing river levels and forecast rainfall quantities give a high risk of flooding of low-lying land.” The second warning is in place for the Upper River Wey, where flooding is a possibility but property flooding “is not currently expected”.

Forecasters predict dry temperatures across most parts of Britain, with increasing brightness into the afternoon by Wednesday.

Winds are picking up in the Northwest, before becoming more severe through the latter half of the week.

By mid-week, Northern Ireland and western Scotland will have turned windy, with heavy, torrential downpours, particularly on hilly areas.

Some fog will be seen in eastern and southeastern England on Wednesday. 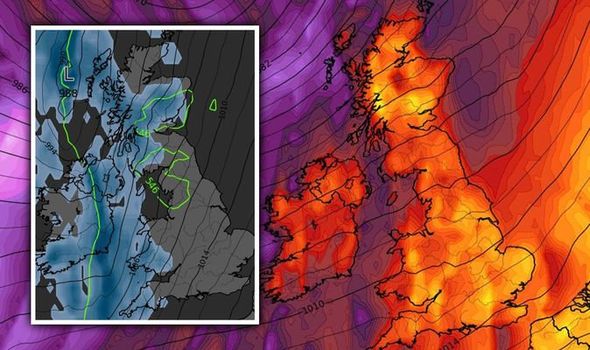 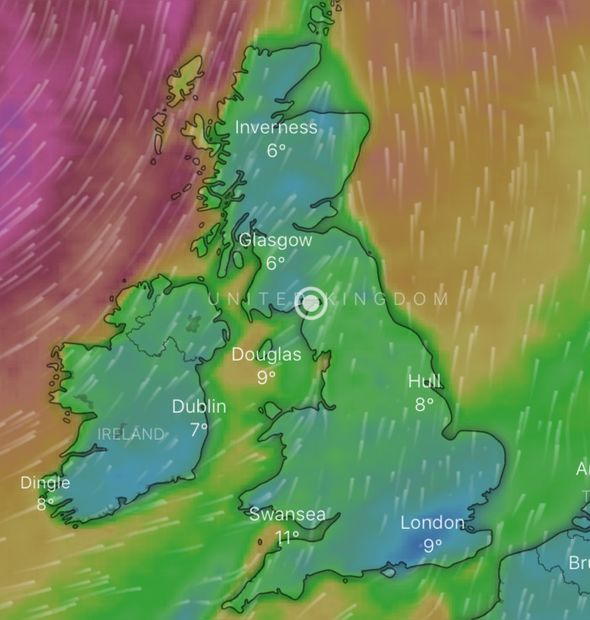 “These gusty winds could be strong enough to bring down a few tree branches and this rain will sweep right the way across the UK through Wednesday and Wednesday night.

“We will all get a dose of that heavy rain for a time.”

And while Thursday promises to be drier and brighter, the forecaster said “it’s all downhill for Friday” as cloud and rain gathers through the end of the week.

Tuesday night will see some wind and rain picking up in Northern Ireland and Western Scotland.

Many southern, central, and some eastern areas will cling onto the bright, mild but breezy weather.

Heavy rain and strong winds in the northwest reaches most other western and northern areas later.

From Thursday to Saturday, the period will be generally unsettled and windy at times, with bands of rain crossing the UK interspersed with brighter, showery interludes.