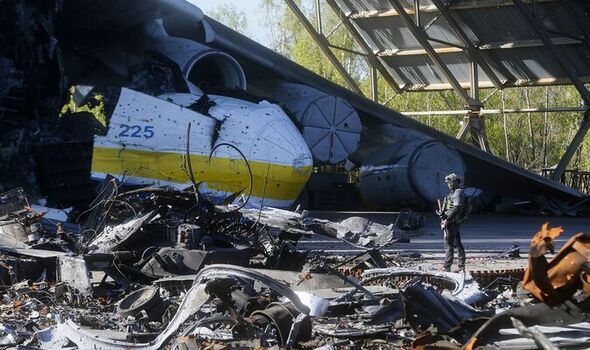 Hostomel, an hour from Kyiv, was taken by Russia during efforts to bring in more troops and ammunition for a blitz on the capital Kyiv. The airport and the world’s biggest plane, the Antonov An-225 Mriya, were destroyed in the ferocious fighting.

Ukrainian troops eventually counter-attacked and retook the airport in March. But with Russia making progress in the Donbas region, concerns over future attacks are rising.

The battle for Hostomel is still evident at every turn. The Antonov is split in half and more aircraft are almost in a pile-up at the end of the main runway. Debris from Russian helicopters is still spattered on the ground, with untouched shells from air rockets and gunfire.

During the fighting in February, it is said Ukrainian troops deliberately disabled airports in case Moscow was successful. But it was not, undoubtedly leading to its biggest loss in this war. The occupation of Hostomel is crucial for both sides because of its close proximity to Kyiv. If Russia had got its way, a clear run upon the capital would have been inevitable. Thankfully for Ukraine, it didn’t happen.

Kyiv’s regional head, Oleksii Kuleba, recently said the Kyiv region was “quiet” of any incoming military activity. But that could soon change.

Analyst Ivan Verstyuk says everything will depend on the outcome of the fighting in the Donbas.

Currently, experts say the closest Russian troops are stationed across the border in neighbouring Belarus, just 100 miles away.

Ivan said: “Belarus still has some Russian troops, but those are mostly capable of defending Belarus and serving as reserves for any future operations.

“Right now, Kyiv is very well fortified, along with all of its neighbouring towns. If the Russian army decides to invade the Kyiv region again, it will suffer severe losses.”

A new bid to take Hostomel may not be a focus for Russia today, but western Ukraine remains vulnerable to long-range missiles.

It is clear Vladimir Putin has not forgotten about capturing Kyiv – and if a fresh major assault transpires, Hostomel could be targeted again.

But presently, more Kyiv-based defence forces are being readied to move further east to strengthen resistance in the Donbas.