The COVID-19 pandemic has brought severe staffing shortages to U.S. prisons as corrections officers, burnt out with the low pay and grueling nature of the work, have quit in droves.

The situation is becoming dire as prison populations, which dropped during the pandemic, are once again on the rise. Having fewer guards means more dangerous conditions and for the officers left behind, worsening shortages have made an already difficult job unbearable, many say. Lance Lowry, a recently retired corrections officer with the Texas State Penitentiary, holds his ID badge on the front porch of his home, Oct. 27, 2021, in Huntsville, Texas.
(AP Photo/Michael Wyke)

In Georgia, some prisons report up to 70% vacancy rates. In Nebraska, overtime hours have quadrupled since 2010, as fewer officers are forced to work longer hours. Florida has temporarily closed three prisons out of more than 140 facilities because of understaffing, and vacancy rates have nearly doubled there in the last year.

In Kansas, state Department of Corrections Secretary Jeff Zmuda testified before the legislature that the problems now are unlike any he’s seen in his career. Kansas has more than 400 unfilled jobs for uniformed officers, a number he expects to grow in the coming months as workers are lured by other employers that pay better. 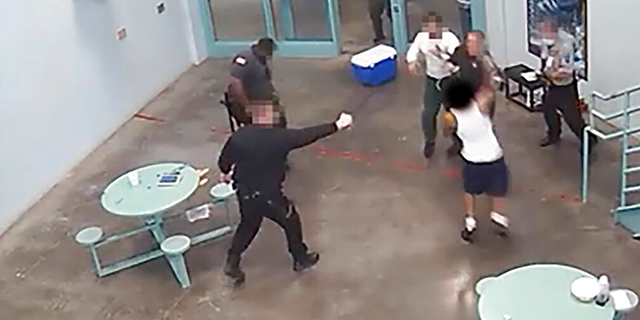 In this July 28, 2021 image made from a video taken by an overhead stationary security camera, guards at the Ohio State Penitentiary break up a fight between two inmates in Youngstown, Ohio.
(Ohio Department of Rehabilitation and Correction via AP)

Many corrections officers said they were forced to work more overtime as fewer people showed up for shifts. In Texas, guards have worked as much as 16-hour days.

Inside prisons, growing shortages mean a rise in lockdowns. Restrictions that might have begun as a way to stop the spread of COVID-19 have continued because there aren’t enough guards to supervise activities. Some incarcerated people say they can’t take classes, participate in group therapy sessions, or even work out in the recreation yard or take a shower.

In July, Georgia had a 56% annual turnover rate for corrections officers, and 40% of those jobs were vacant, according to department documents. The U.S. Justice Department announced an investigation into the corrections department in September, citing understaffing as a primary concern. 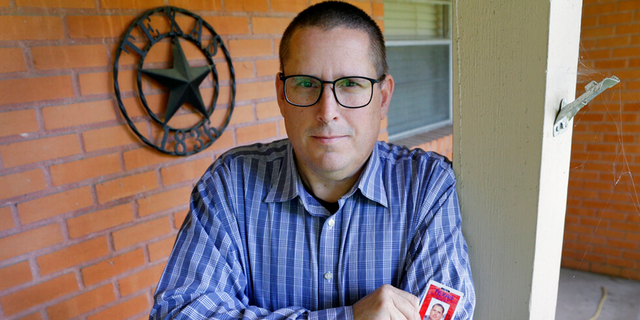 Lance Lowry, a recently retired corrections officer with the Texas State Penitentiary, holds his ID badge on the front porch of his home, Oct. 27, 2021, in Huntsville, Texas.
(AP Photo/Michael Wyke)

Meanwhile, corrections departments say they are trying harder than ever to recruit new staff. Others are giving perks like hiring bonuses, better pay at critical units, earlier pay raises, or extra time off for current employees who refer new hires.

Other sectors of the economy – everything from construction to restaurants to retail – are having difficulty hiring and keeping people. Nearly 3% of American workers, 4.3 million, quit their jobs in August, according to new data from the U.S. Bureau of Labor Statistics.