A military veteran has been found guilty of the manslaughter of a man who was shot in the back at an Army checkpoint in Northern Ireland during the Troubles in 1988.

Aiden McAnespie was shot at the Aughnacloy, County Tyrone border checkpoint on February 21, 1988, by David Jonathan Holden. Holden was aged 18 at the time and serving with the Grenadier Guards.

He was manning a general purpose machine gun on his first day of checkpoint duty inside a sangar as Mr McAnespie, 23, was walking through the checkpoint on his way to a Gaelic Athletic Association match.

Today’s verdict at Laganside Courts in Belfast comes after the trial was reserved ahead of judgement on March 28 of this year, and amidst a fierce row over ongoing prosecutions of veterans. 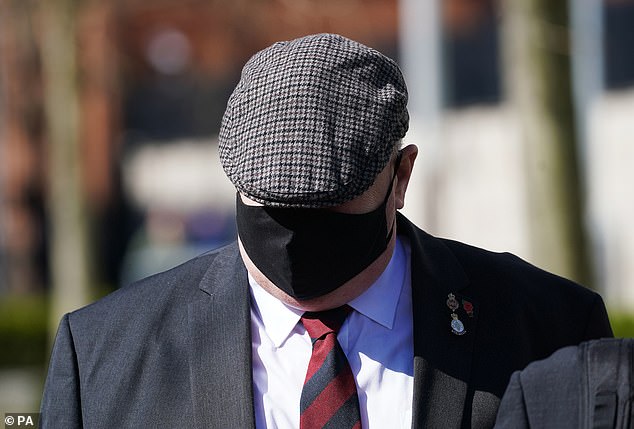 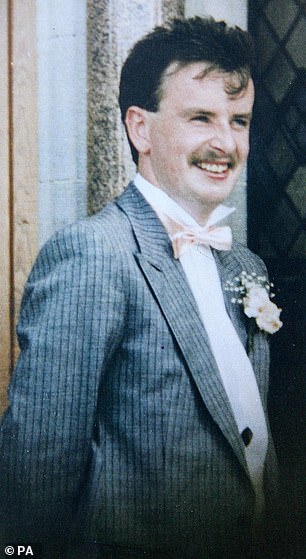 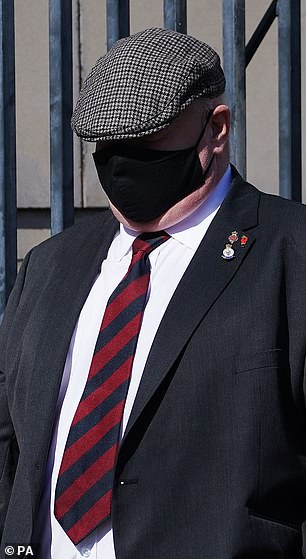 Mr Holden (right, today), a former Grenadier Guardsman who is now 52, denies one charge of manslaughter. Left: McAnespie, 23, was killed after walking through a border checkpoint at Aughnacloy, in County Tyrone

During the trial, Mr McAnespie was described as a ‘person of interest’ by Holden, who said the victim’s car registration number was labelled as ‘tax rep’.

This meant Mr McAnespie was considered by the army as a ‘terrorist or suspected terrorist’.

He had been on his way to a local Gaelic Athletic Association club when he was shot in the back after three rounds were fired by the automatic weapon.

During the trial, Holden, now 52, denied the charge and told the court he had fired unintentionally and his finger had slipped on the trigger ‘because they were still wet’ from cleaning duties.

But trial judge Mr Justice O’Hara said he was satisfied beyond reasonable doubt that Holden was guilty of manslaughter by gross negligence.

He added Holden should have appreciated from the moment he pulled the trigger the consequences of his actions.

The original signed statement made by Holden in 1988 was read out to the court.

It said he ‘did not cock the weapon’ and he wanted to make clear he ‘did not point or aim’ the gun ‘at Aidan McAnespie in jest or with intention of firing at him’.

He had told police: ‘I was surprised when the weapon went off. I regret that Aidan McAnespie is dead and this accident happened and hopefully it will be the last accident of this type.’

The court was told Mr Holden’s statement was taken by a detective chief inspector at the Royal Ulster Constabulary station in Dungannon on February 23, 1988 in the presence of other police officers.

During Holden’s trial in March, Crown counsel Ciaran Murphy QC said Mr Holden did not want ‘to make any admission that he had been training the gun on Mr McAnespie … [because] he would have known about the consequences of his actions’. 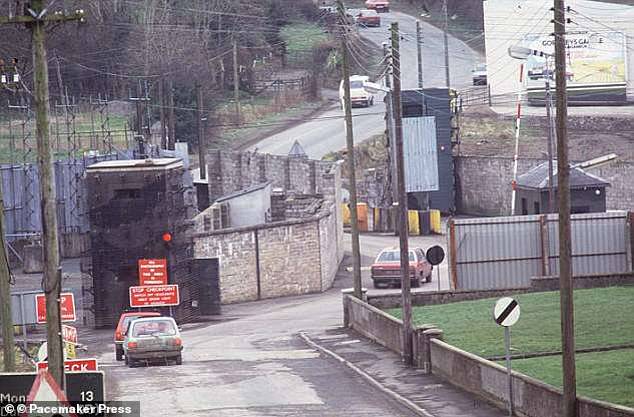 McAnespie was on his way to a local Gaelic Athletic Association club when he was shot in the back in Aughnacloy, County Tyrone (pictured) 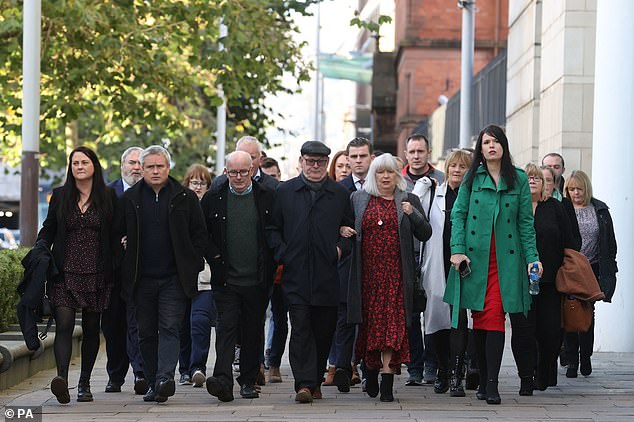 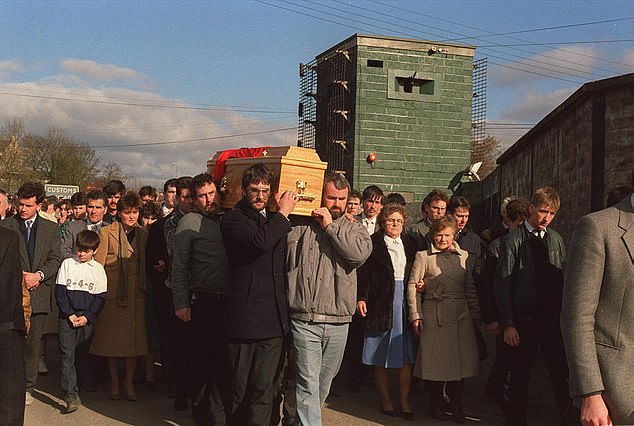 ‘The one person he was aware of and in whom he had an interest was Aidan McAnespie. Of all the areas he could have struck with a ricochet or otherwise he managed to strike the very target of his surveillance,’ said Mr Murphy.

Mr Murphy said that the prosecution did not accept Mr Holden’s theory that he had wet hands 10 minutes after his cleaning duties, that he lost control of the weapon, his finger slipped and he ‘squeezed the trigger’.

‘Squeezing the trigger means ‘I intentionally pulled the trigger’, not that his hand slipped. This was a deliberate act,’ said the prosecutor.

‘The only reason he squeezed the trigger was when he looked down the barrel of the weapon in the direction of his surveillance target, he saw Mr McAnespie, he pulled the trigger and fired three shots, killing Mr McAnespie which was a grossly negligent act.

‘He failed in his duties when he squeezed that trigger resulting in catastrophic consequences. He didn’t intend to kill him but he did pull the trigger.’

Supporters for Holden gathered outside the court each day the trial sat.

The trial proceeded amid continuing controversy over government plans to deal with Northern Ireland’s troubled past.

The Northern Ireland Troubles (Legacy and Reconciliation) Bill proposals provide an effective amnesty for those suspected of killings during the conflict, if they agree to co-operate with a new body, known as the Independent Commission for Reconciliation and Information Recovery.

The Holden case is one of a series of high-profile prosecutions of veterans that have been pursued in Northern Ireland in recent years.

In his 1988 statement, Holden said: ‘I, Dave Holden, wish to make a statement. I want someone to write down what I say. I’ve been told that I need not say anything unless I wish to do so, and that whatever I say may be given in evidence.

‘On Sunday the 21st of February, 1988 I commenced duty at the PVCP [Permanent Vehicle Checkpoint] on the Monaghan Road at Aughnacloy at 8.30am.’

He said he was to do duty in the north sangar along with another guardsman.

His statement continued: ‘We agreed to change roles every two hours. By this I mean we would change from the top of the sangar to the bottom.

‘The man on the bottom part of the sangar checks the car plates and phones the number through to the Ops Room at Aughnacloy Army base.

‘The soldier in the top part of the sangar does look out from one or more, four, windows. There’s a GPMG (General Purpose Machine Gun) mounted at all times in one of the windows.

‘It is mounted on a single pivot which allows the weapon to move from right to left. Because the butt of the gun is heavy, the muzzle always points into the air outside the window.

‘The GPMG is always loaded with a belt of 50 rounds and there are two more belts of 50 rounds lying on the windowsill that the weapon is pointing out of.

‘Although the weapon is loaded, it is always made safe.’

This story is being updated.