Putin’s war in Ukraine could spiral out of control and become a full-fledged GLOBAL conflict between Russia and The West, NATO boss warns

Vladimir Putin’s war against Ukraine could spiral out of control and become a full-fledged global conflict between Russia and The West, the head of NATO has warned.

‘It is a terrible war in Ukraine. It is also a war that can become a full-fledged war that spreads into a major war between NATO and Russia. We are working on that every day to avoid that.’

Mr Stoltenberg, a former prime minister of Norway, said in the interview that ‘there is no doubt that a full-fledged war is a possibility,’ adding that it is important to avoid a conflict ‘that involves more countries in Europe’. 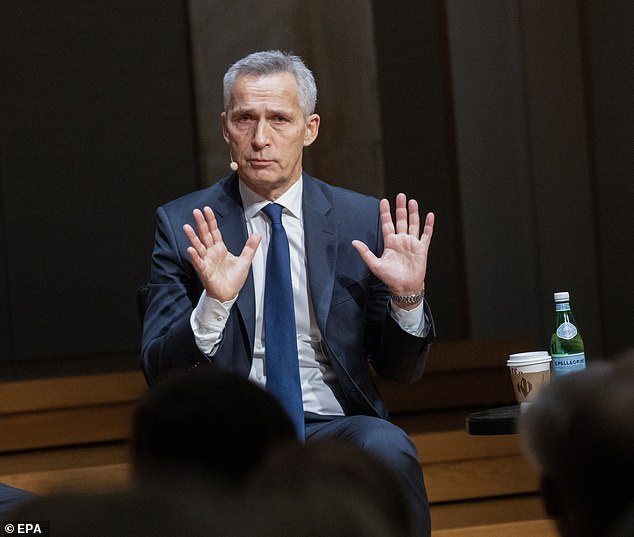 NATO Secretary General Jens Stoltenberg, pictured, warned in an interview that Putin’s war against Ukraine could spiral out of control and become a full-fledged global conflict between Russia and The West

The Kremlin has repeatedly accused NATO allies of effectively becoming a party to the conflict by providing Ukraine with weapons, training its troops and feeding military intelligence to attack Russian forces.

In comments that reflected soaring tensions between Russia and the West, President Vladimir Putin suggested Moscow might think about using what he described as the US concept of a preemptive strike.

‘Speaking about a disarming strike, maybe it’s worth thinking about adopting the ideas developed by our US counterparts, their ideas of ensuring their security,’ he said. 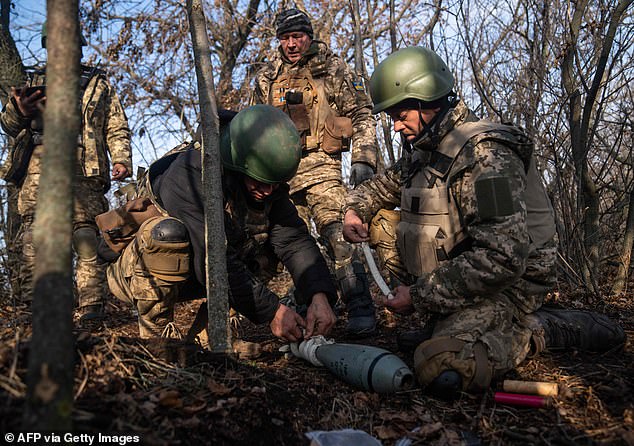 Mr Stoltenberg said: ‘It is a terrible war in Ukraine. It is also a war that can become a full-fledged war that spreads into a major war between NATO and Russia.’ Pictured: Ukrainian soldiers from the 68th brigade prepare a 120mm round to fire in the Donetsk region today

Long before the Ukraine war, the Kremlin expressed concern about US efforts to develop the so-called Prompt Global Strike capability that envisions hitting an adversary’s strategic targets with precision-guided conventional weapons anywhere in the world within one hour.

Putin noted that such a strike could knock out command facilities. ‘We are just thinking about it, they weren’t shy to openly talk about it during the past years,’ he said, claiming that Moscow’s precision-guided cruise missiles outperform similar US weapons and Russia has hypersonic weapons that the US has not deployed.

Putin also said he was disappointed with former German Chancellor Angela Merkel’s recent comments that a 2015 peace deal for eastern Ukraine negotiated by France and Germany had bought time for Ukraine to prepare for the 2022 war.

‘I assumed that other participants of the process were sincere with us, but it turned out that they were cheating us,’ he said. 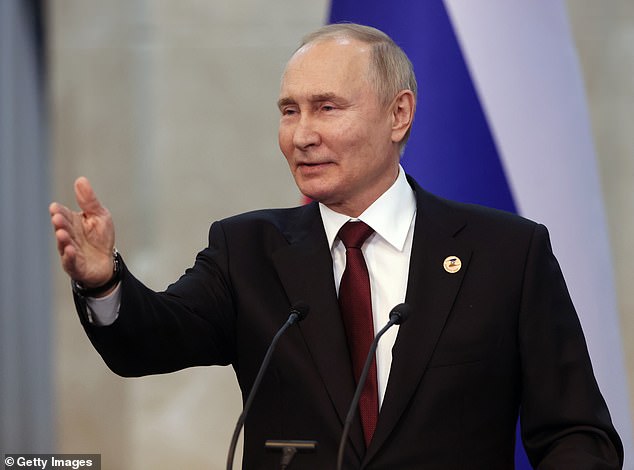 In comments that reflected soaring tensions between Russia and the West, President Vladimir Putin, pictured, suggested Moscow might think about using what he described as the US concept of a preemptive strike

‘It turned out that they wanted to pump Ukraine with weapons and prepare for hostilities.’

Putin argued that Ms Merkel’s statement showed that Russia was right in launching what he calls the ‘special military operation’ in Ukraine.

‘Perhaps we should have started it earlier,’ he said. He added that her comments further eroded Russia’s trust in the West, complicating any possible peace talks.

‘Eventually we will have to negotiate an agreement. But after such statements there is an issue of trust. Trust is close to zero. I repeatedly have said that we are ready for an agreement, but it makes us think, think about whom we are dealing with.’

In separate comments via video link to defence and security chiefs of several ex-Soviet nations, Putin again accused the West of using Ukraine as a tool against his country.

‘For many years, the West shamelessly exploited and pumped out its resources, encouraged genocide and terror in the Donbas and effectively turned the country into a colony,’ he said.

‘Now it’s cynically using the Ukrainian people as cannon fodder, as a ram against Russia by continuing to supply Ukraine with weapons and ammunition, sending mercenaries and pushing it to a suicidal track.’

Ukrainians say they are fighting for freedom against an unwanted invader and aggressor. Prime Minister Rishi Sunak spoke to Ukrainian President Volodymyr Zelensky by phone on Friday and both ‘agreed on the importance of pre-empting Russia’s insincere calls for a ceasefire,’ Mr Sunak’s office said.

‘The Prime Minister added that the Kremlin needed to withdraw its forces before any agreement could be considered.’ 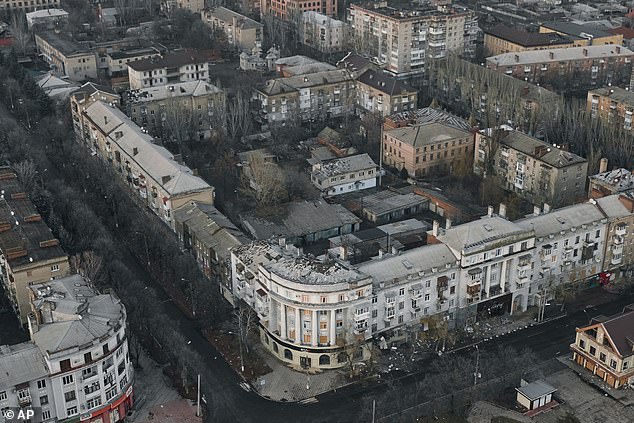 Donetsk regional governor Pavlo Kyrylenko said the Russians were pressing an offensive on Bakhmut with daily attacks, despite taking heavy casualties. Pictured: An aerial view of Bakhmut, the site of the heaviest battles with the Russian troops in the Donetsk region 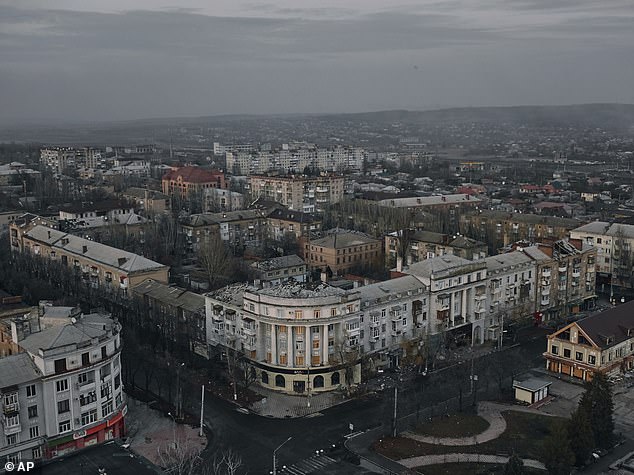 Mr Kyrylenko said: ‘You can best describe those attacks as cannon fodder. They are mostly relying on infantry and less on armour, and they can’t advance’

Heavy fighting continued on Friday in eastern and southern Ukraine, mostly in regions that Russia illegally annexed in September. Ukraine’s presidential office said five civilians have been killed and another 13 have been wounded by Russian shelling in the last 24 hours.

‘You can best describe those attacks as cannon fodder,’ Mr Kyrylenko said. ‘They are mostly relying on infantry and less on armour, and they can’t advance.’

In neighbouring Luhansk in eastern Ukraine, regional governor Serhiy Haidai said the Ukrainian military was pushing its counteroffensive toward Kreminna and Svatove. 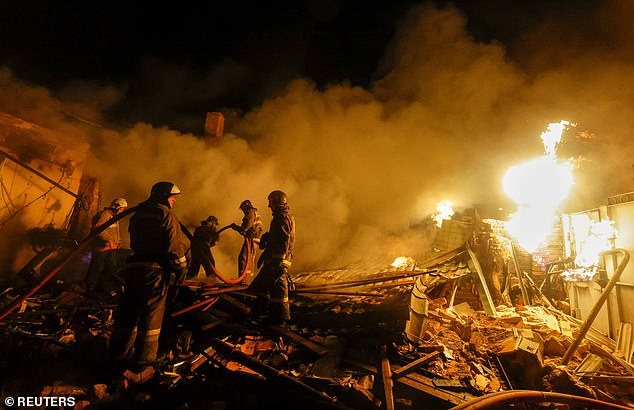 He voiced hope Ukraine can reclaim control of Kreminna by the end of the year, and then by the end of winter reclaim areas in the region that were captured by Russia since the war began.

In the south, Kherson regional governor Yaroslav Yanyshevych said eight civilians were wounded by Russian shelling in the last 24 hours, and in the city of Kherson that Ukraine retook last month, a children’s hospital and a morgue were damaged.

In the neighbouring Zaporizhzhia region, Russian forces shelled Nikopol and Chervonohryhorivka, which are across the Dnieper River from the Russia-occupied Zaporizhzhia nuclear power plant.