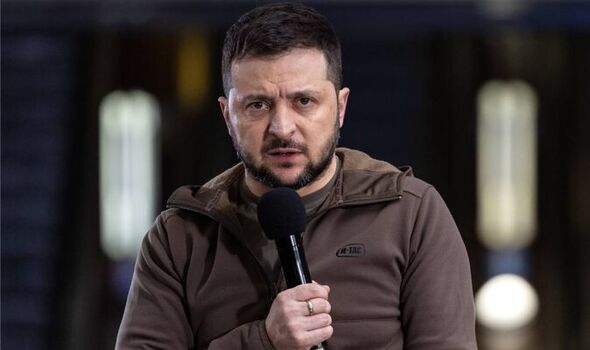 The Ukrainian leader said yesterday that the Kremlin is “annoyed” by the two nations close ties during the war. And he warned that some politicians in Europe are still “not ashamed” of their links to Vladimir Putin.

The UK, along with the US, is one of the largest suppliers of arms to the war-torn country. Some European nations have been criticised for failing to send more arms or support an oil embargo.

Mr Zelensky said the Kremlin’s missile strikes during Boris Johnson’s speech to the Ukrainian parliament earlier this week showed the two countries are “really strong in defending freedom in Europe”.

He said: “If everyone in the world – or at the vast majority – were steadfast and courageous leaders as Ukraine, as Britain, I am sure we would have already ended this war and restored peace throughout liberated territory for all our people.”

The Prime Minister became the first Western leader to address the parliament in Kyiv earlier this week, where he was given numerous standing ovations.

Stormer launchers will also be sent to give troops vehicles that carry Starstreak laser-guided anti-aircraft missiles, a roving threat to Russian jets and helicopters.

European diplomats have been locked in tough negotiations over a proposed new package of sanctions against Russia, with Hungary against a ban on Moscow’s oil imports.

The plan involves phasing out crude oil over six months and refined products by the end of 2022.

Hungary and Slovakia would be given an extension allowing them to keep importing until the end of 2023. But they say that is not enough, while the Czech Republic has asked to be given the same flexibility.

In a speech Mr Zelensky, who later presented medals to Ukrainian servicemen and women in Kyiv, said: “Russian troops today, as every day during this war, have continued to bomb our cities and our people.

“My traditional morning meeting with the leadership of the army, with officials and diplomats was accompanied by the sound of air-raid sirens. This is our reality.

“This can be called a certain ‘Russian compliment’ to your brilliant speech and our fruitful interstate cooperation. Obviously Russia is annoyed by our proximity, Ukraine and Britain.

“So this means that we are really strong in defending freedom in Europe. Bravery is rightly believed the first of human qualities as it guarantees all others. Thank you, Britain.Thank you, Boris.Thank you all.”

Meanwhile, Kremlin spokesman Dmitry Peskov criticised “hostile rhetoric” coming out of Poland and accused Warsaw of being “a source of threat”.

Poland has led calls for the EU to toughen sanctions on Vladimir Putin and his cronies and for the Western Nato alliance to arm Ukraine. Polish minister Anna Moskwa said earlier this week her country was “proud to be on Putin’s list of unfriendly countries”.

But in a cryptic message during a speech to the Chatham House think-tank, Mr Zelensky said: “There are some politicians in Europe still who are not ashamed of their relations after all Russia did in Europe.

“The response of the world should be instantaneous. For the most part the challenges posed by Russia have not received adequate responses.”

Mr Zelensky described the invasion as “torture and hatred” before adding “it’s inhuman and degrading”.

And he challenged German Chancellor Olaf Scholz to visit Kyiv again to show unity – and for this to coincide with victory Day in Russia on May 9, which marks the country’s triumph over Adolf Hitler.

Mr Zelensky said: “He can make this very powerful political step by coming on May 9. Sometimes in history, we have to make certain steps for unity.”