London transport staff have been warned that anti-vax ‘propaganda’ posters have been found with razor blades which could injure anyone trying to remove them, a union has revealed.

In a health bulletin issued to staff by Transport for London, the network states that there have been ‘a number of reports’ of incidents where blades have been found on the back of the posters.

While TfL say none have been found on their network, it references at least one incident where a person was injured while trying to remove a poster which read: ‘Masks don’t work. Masks – a visual prop to drive fear and prolong the pandemic.’

The Rail, Maritime and Transport (RMT) union said the posters had been put up on rail and Tube stations in London.

The union called for action against those responsible for the posters and revealed that TfL staff had been warned to be cautious before they attempt to remove any posters spreading misinformation. 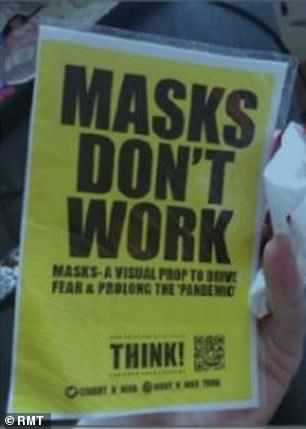 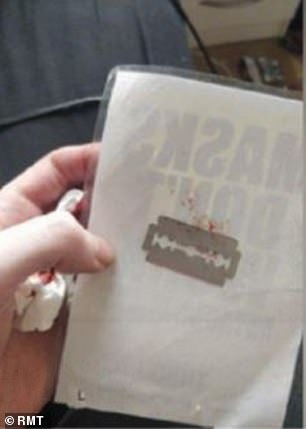 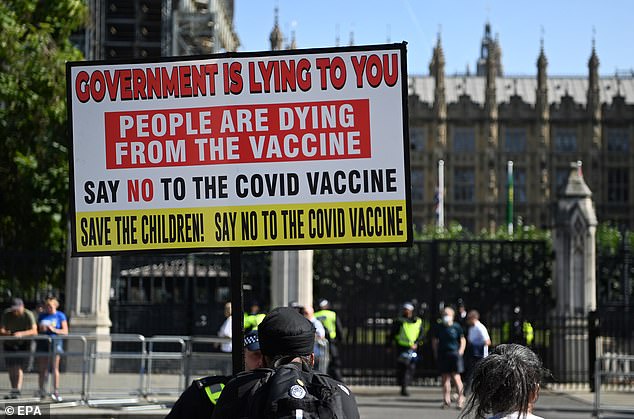 The TfL Safety, Health and Environment bulletin, issued last week, said ‘propaganda posters’ that questioned the existence of Covid-19 and spread untruths about vaccinations, had been placed in locations such as doors, lamp-posts and walls.

Staff have been advised to check for sharps before removing any unauthorised posters and to seek immediate medical advice if they are injured.

The bulletin included two images, one of a poster and another showing its reverse which had a razor blade stuck to it and was spattered with blood.

It is being held by someone carrying a bloodied tissue.

It is understood the pictures are of a 22-year-old woman in Cardiff who suffered a ‘deep cut’ to her hand after removing one of the posters earlier this year with reports of similar incidents in other parts of the country. 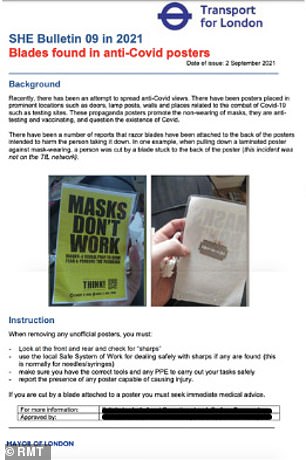 A copy of the bulletin issued to TfL staff

Similar warnings have been issued about posters being put up near vaccination centres with reports suggesting some contained razor blades.

General secretary Mick Lynch said: ‘Any anti-vax conspiracy theorist resorting to this disgusting practice of lacing their propaganda with razor blades needs to know that they will face criminal prosecution and the highest possible sentences.

‘As far as RMT is concerned they should be locked up for a long time. We would expect the police and the courts to take the hardest possible line.’

Transport for London (TfL) said it was not aware of any incidents of this nature involving razor blades taking place on its network.

A TfL spokesperson said: ‘We act urgently to remove unauthorised materials from our network, such as posters, including those relating to the pandemic.

‘The safety of our customers and colleagues is paramount and we have issued guidance to our staff on how to remove them safely after reports of instances outside of our network of razor blades being attached to the back of such materials.

‘None have been detected on our network and there have been very few instances of unauthorised adverts and materials relating to the pandemic.’