After 46 days, almost 4000 kilometres and too many meat pies to count, 23-year-old Nedd Brockmann will make his way to Bondi on Monday afternoon and finish the mega run that has captured the nation.

Leaving Perth’s Cottesloe Beach on September 1, Brockmann vowed to run 3800 kilometres across the country to raise money for the homelessness charity Mobilise – despite only picking up running as a hobby in 2020 during the COVID-19 pandemic.

His incredible feat will come to an end as he makes his way to the finish about 5.30pm this afternoon at North Bondi Surf Life Saving Club with hundreds set to line the shores to welcome the country kid from Forbes in NSW’s Central West to the nation’s east coast. 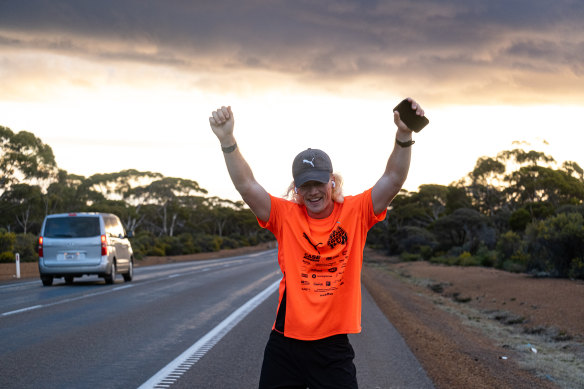 Nedd Brockmann only started running in 2020 but is about to finish a 3800km mega-marathon.Credit:Bradley Farley

The sparkie has already raised more than $1.35 million with a goal of reaching $1.5 million by the end of his campaign.

Brockmann has been running an average of 100 kilometres a day through the month-and-a-half journey and has suffered a litany of injuries along the way – including severe tenosynovitis in his shins, massive blisters and maggots growing in his toes.

By the end of his run, he will have completed more than 270 City2Surfs.

Brockmann’s campaign has been closely documented on his personal Instagram page with his diet of meat pies, Sour Patch Kids, and Krispy Kreme doughnuts capturing attention across the globe.

The run has seen Brockmann receive a litany of video messages of support, including his favourite NRL team, the Parramatta Eels, and UFC star Israel Adesanya.

Taking to his Instagram story on Monday just after 10am, Brockmann seemed in good spirits as he made his way towards the coastline.

“The clouds are out. The birds are chirping, the cars are on the road, and we are coming home,” he said in the video.

“We are coming home baby, donate if you haven’t. It’s the last f—ing day.” 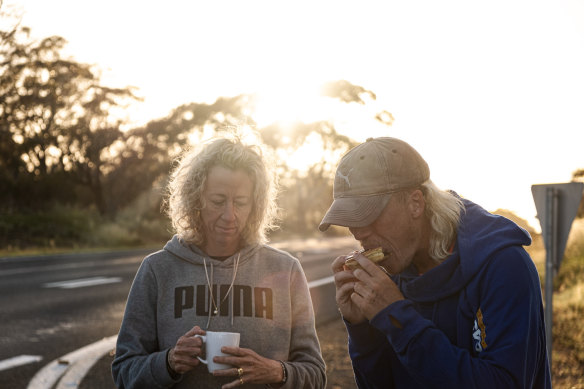 Nedd Brockmann pictured with his mother, Kylie, on the road.Credit:Bradley Farley

The mullet-sporting mega-marathoner is completing the run alongside a team of his parents, Kylie and Ian Brockmann, girlfriend Jemma Griffin, friend and photographer Bradley Farley, as well as his physio and sponsor.

Speaking on 2GB on Monday morning, mum Kylie said there was nothing that could stand in the way of her son completing his race.

“He will be in hospital before he stops,” she said.

“There have been some extremely gruelling and heartbreaking times, but Ned’s energy is what we feed off. He’ll be pretty pumped on the energy that will be around [at the finish line].”

Brockmann’s spokesman James Ward encouraged the public to make their way down to North Bondi Surf Life Saving Club on Monday afternoon to cheer him to the finish line.

“Nedd woke up this morning so pumped for the day and is in amazing spirits and charging home – he can’t wait to get to Bondi to celebrate the end of his epic run and thank everyone for their incredible support,” he told this masthead.

“Rain, hail or shine he is on track for a finish around 5.30pm, so we can’t wait to see as many people down here as possible.”

The rain has provided yet another challenge for Brockmann in the back end of his run with almost 55 millimetres of rainfall hitting Sydney since 2am.

The rain is set to ease for the rest of Monday before three millimetres is expected to fall across the harbour city on Tuesday.

A day of reprieve will come on Wednesday, which is forecast to be sunny and 24 degrees, before the rain is expected to return on Thursday with up to 10 millimetres of rain predicted.