Coghlan has spent more than 50 years investigating, prosecuting and judging serious crooks on serious crimes, and he didn’t miss on his last day on the bench, sentencing the notorious George Marrogi to a minimum of 27 years for the 2016 murder of Kadir Ors outside the Campbellfield Plaza. 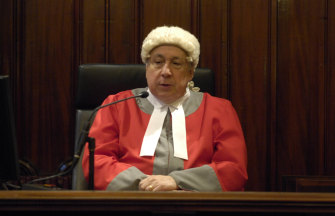 Marrogi is violent and ruthless but not necessarily a forward thinker. He fired 13 shots at Ors, hitting him seven times, and then had to fire more at two of Ors’ friends who drove after him. Even so, it took four trials to convict him.

For Marrogi, it was a body blow. For Coghlan, it was another day in the office.

Unlike many who dive deep into the murky world of gangsterism, Coghlan appears to have emerged unscathed. “I’m lucky because I don’t seem to worry [about traumatic cases]. I’m able to shut the door of the chambers and not take it home.”

As we sit at a coffee shop opposite the Supreme Court, the 78-year-old peppers his recollections with funny anecdotes, insider nicknames and a veteran’s observations. Clearly, he is a man who has loved his job.

He misses the days when serious work was punctuated with fun — when he worked as part of a team of prosecutors or the legal adviser for police taskforces on complex cases. Cracking jokes on the bench can backfire if the Court of Appeal lacks a sense of humour.

He lives a relatively anonymous life but on his regular visits to his local market, he often receives unsolicited advice on the justice system. Dealing with the public remains the great leveller.

As a Supreme Court judge for 15 years and the director of public prosecutions for seven before that, he has dealt with the dangerous, the deranged and the downright dastardly.

He is both bemused and amused by how crooks who would have been better off keeping a low profile actively sought the headlines.

“There is always underworld violence but in the Purana [taskforce] days [of the Melbourne gangland war], there was a certain amount of madness. They were always going to get caught.

“Carl [Williams] called himself ‘The Premier’ because he thought he ran Victoria.”

And then there was prodigious drug dealer Tony Mokbel, who decided he could make a deal. In a secret meeting with police which both sides promised not to record (both sides lied), he tried to broker a deal.

Too many people were getting killed and there were far too many murder investigations for his liking and he just wanted everyone to calm down and get back to their core businesses.

“He said he would get people to ’fess up to drug dealing and we could call it quits. He said, ‘I’ll get Con [Heliotis, QC, his barrister] to talk to Paul [Coghlan] to work out the details’,” Coghlan recalls. 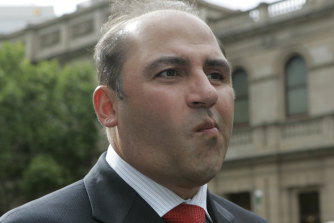 Tony Mokbel outside court in 2006. There were deals, but not the kind he had hoped for.Credit:Angela Wylie

There were to be deals, but they would not be to Mokbel’s liking.

In Victoria, we have had many underworld wars and rarely have there been successful prosecutions because of the so-called code of silence. For the first time, Coghlan facilitated a series of deals where killers were offered discounted sentences to give evidence against the syndicate bosses.

“We made offers too good to refuse. It was better to be in the brief [as a witness] than on it [as the accused].”

Beneficiaries included one of Williams’ paid killers, who turned on him and was taken secretly to Ballarat to plead guilty to reduced murder charges in exchange for becoming a prosecution witness.

Of all the gangland murders, the one that puzzles Coghlan most is that of Graham Kinniburgh, gunned down outside his Kew home in 2005.

Unlike the headline-hogging crooks, Kinniburgh was a quiet achiever. Possibly Australia’s best safebreaker, he lived modestly (except for regular visits to the Flower Drum, where his tab died with him. He once claimed to have spent “50 grand on fried rice”).

“The murder of Kinniburgh is the great mystery. He was trying to be the peacemaker. He was never going to be a give-up [police informer],” says Coghlan.

This statement sums the retiring judge up. He never lost the common touch and was comfortable in the company of crooks, cops, lawyers and jurors.

Many believe the Supreme Court bench is inhabited by crusty men who ate crustless sandwiches at elite private schools before progressing to rowing on the Yarra, studying at Melbourne University and dining at the Melbourne Club, invariably taking on dozens of oysters kilpatrick and gallons of white burgundy. Coghlan shows this is just a cliche.

The grandson of a Chinese merchant, innkeeper and opium dealer, Chien Ah Foo, Coghlan, the youngest of four, went to the local Catholic school and enrolled in medicine at university before jumping across to the law.

Far from being a regular at the Flower Drum, his family were given an extra rice coupon during rationing because of their heritage.

The process in those days was a touch more robust. There was no DNA, phone taps, CCTV or taped interviews. It was the day of the typed record of interview, where the accused would often claim confessions were fabricated.

In one case, Coghlan recalls, when a detective was asked why it took two hours to take a three-page statement, he responded: “I’m a slow typer.”

Today’s trials are more complex, more demanding and longer, with the delays stretching for years, leading Coghlan to call for reforms, starting at the magistrates courts.

Each year, he says, about 74,000 arrest warrants are issued at the magistrates courts, adding to the backlog and forcing police to rearrest offenders.

In many cases, the warrants are issued when an accused fails to attend a hearing on minor charges.

Coghlan wants the matter finalised with a guilty verdict, leaving the accused the right to appeal if there is a reason they didn’t attend the hearing: “Give them a court date that says the matter will be dealt with in their absence and stop clogging the system with rubbish.”

He wants judges involved in the plea-bargaining process, where the accused is informed what sentence to expect if they plead guilty or decide to go to trial. “They should put a number [of years] to it.”

As it stands, the offender can wait to test the case at a committal hearing, then get a sentence discount by pleading guilty later.

“With trials taking four years to be heard, why would you plead guilty early when anything could happen?” Coghlan asks.

The earlier the plea, he says, the greater the discount should be, because it spares victims and witnesses the trauma of giving evidence in trials, although he is quick to add that “there are some crimes that are so horrific there should be no discount”. 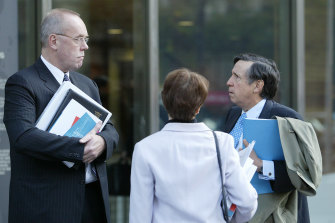 Coghlan (right) outside the County Court in his days as Director of Public Prosecutions.Credit:Joe Armao

Coghlan knows that while the accused has rights, victims need protection. There can be no greater example than the murder of Mersina Halvagis, killed in 1997 tending her grandmother’s grave at the Fawkner Cemetery.

The star suspect was serial killer Peter Dupas, but for years there was insufficient evidence to charge him. When the breakthrough came, Dupas had already been sentenced to life with no minimum over two murders.

Even though Dupas would not serve one extra day’s jail as a result, Coghlan, as DPP, authorised the prosecution so the Halvagis family would receive justice.

“There was never any doubt we would run the case,” he says.

Despite the complexity of trials, he remains a staunch supporter of the jury system, where citizens plucked from the street spend months digesting the minute details of crimes committed years earlier. “Juries are fantastic. It is the best system possible.”

In one of the Marrogi trials, he discharged the jury after one member reported seeing a man she earlier spotted loitering in her apartment building turn up at court to chat with the accused.

In one case, he was surprised when a mafia boss he prosecuted was acquitted when the evidence seemed strong. “I was told the jury was scared.

“There was one mafia figure who had a remarkable run with juries,” he says, without further comment.

Coghlan shuts the door on his chambers with a lifetime of memories and no regrets. “I’ve had a fantastic life in the law.”

But he isn’t ready for full-time retirement. The man who prosecuted crooks has just been appointed special adviser to former Supreme Court and Federal Court judge Mark Weinberg’s probe into alleged war crimes in Afghanistan.