After staying three nights in the hospital to help fight his coronavirus infection, U.S. President Donald Trump is set to be released Monday. But it’s still unclear exactly how sick the president has been since his diagnosis.

Trump was admitted to the Walter Reed National Military Medical Center on Friday, after he announced he and First Lady Melania Trump, contracted COVID-19.

White House physicians have given Trump a mixture of medications — including an experimental drug and a steroid medicine only given to people with severe COVID-19 — in the hope of relieving his symptoms.

Trump apparently is not receiving hydroxychloroquine, a drug he widely promoted that has been shown in many studies to be ineffective for preventing or treating the virus.

While talking to the media on Saturday, the president’s doctor, Navy Cmdr. Sean Conley, said he was using a “multi-prong” approach to treat Trump.

“He is receiving all of the standard of care and beyond for routine, international COVID protocols,” Conley said. “He’s the president. I didn’t want to hold anything back. If there was any possibility that it would add value to his care and expedite his return, I wanted to take it.”

So what are the drugs doctors have given Trump?

One of the doctors treating Trump, Dr. Brian Garibaldi, said Sunday the president is being given the steroid drug dexamethasone as part of his COVID-19 treatment in response to his low oxygen levels.

“In response to transient low oxygen levels … we did initiate dexamethasone therapy, and he received his first dose of that yesterday,” Garibaldi said Sunday.

Dexamethasone is a generic steroid widely used in other diseases to reduce inflammation, according to the Mayo Clinic.

The Infectious Disease Society of America says dexamethasone is beneficial in people with critical or severe COVID-19 who require extra oxygen. But studies show that the drug is not helpful — and may even be harmful — in people with a milder case of the illness.

The drug was first shown to be helpful in June in clinical trials in the United Kingdom. Preliminary results of the trial, published in the New England Journal of Medicine, found the steroid reduced the risk of death in patients with severe COVID-19 who need supplemental oxygen. But for mild cases, the treatment was harmful, the study showed.

The National Institutes of Health (NIH) guidelines for the drug said that dexamethasone should be given only to patients who are on ventilators or need supplemental oxygen. The NIH said it does recommend using it for those with less serious illness because of the potential for harm, as it can suppress the immune system.

Doctors not involved in treating Trump for COVID-19 said the fact that he has been started on dexamethasone is the strongest evidence yet that his case may be severe.

Dr. Nicholas Christakis, a physician and sociologist at Yale University, took to Twitter to talk about the drug given to Trump

Dr. Rochelle Walensky, chief of infectious diseases at Massachusetts General Hospital, told CNN that the use of dexamethasone had some “scratching our heads” because it’s suggested for people with severe illness.

“Generally, you start the dexamethasone when you’re starting to worry that they’re heading down the wrong path,” Walenksy said. “So, what happened today? Either he progressed or people are like, well, let’s just throw the kitchen sink at him. It’s unclear to me why they would have given him that if he did not require supplemental oxygen.” 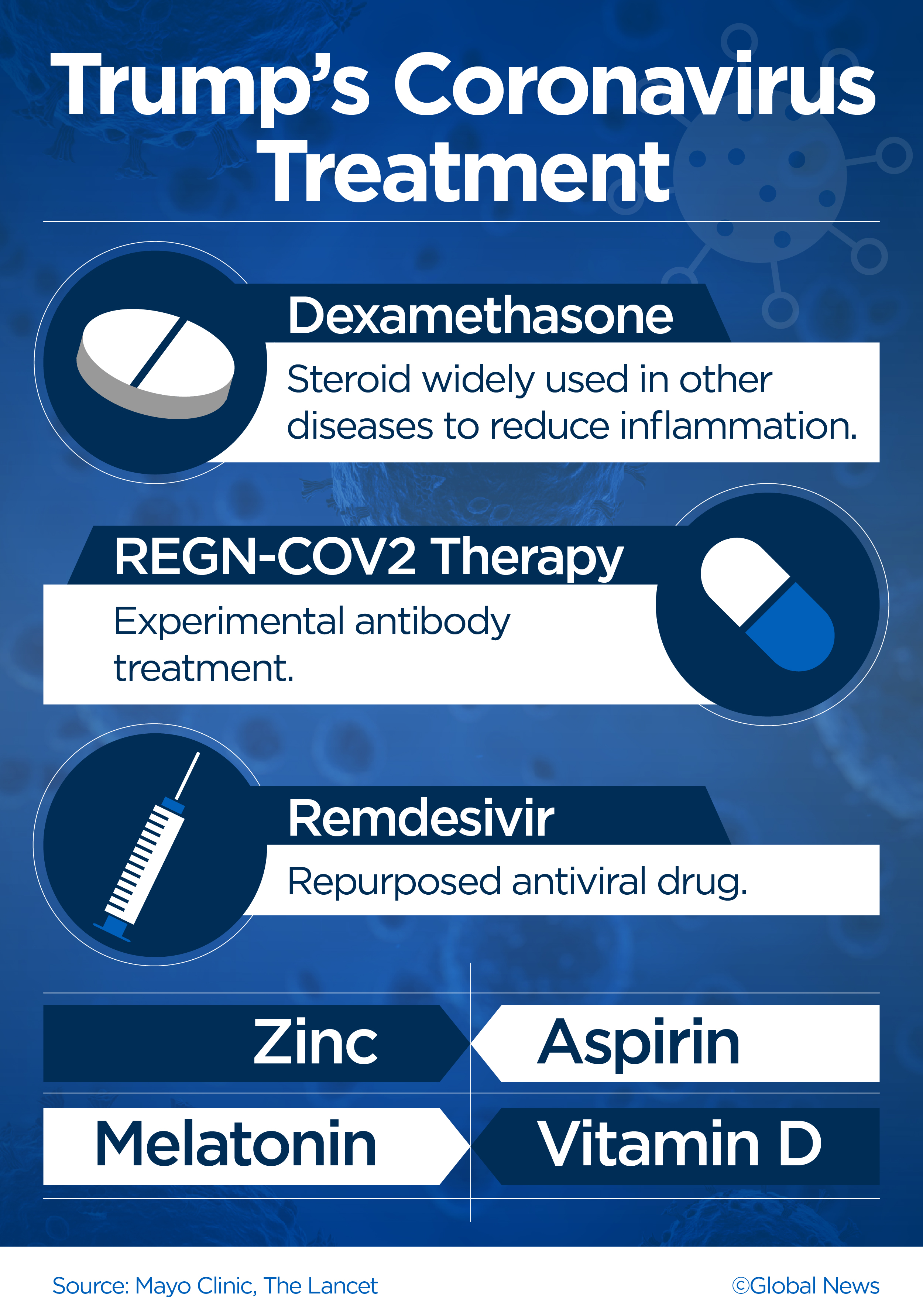 Trump received a single dose of an antibody cocktail (REGN-COV2) made by the biotech company Regeneron Pharmaceuticals, according to the White House.

Trump was given the experimental drug at the White House on Friday before he was taken to Walter Reed National Military Medical Center, officials said.

Regeneron Pharmaceuticals Inc., said the company agreed to supply a single dose for Trump at the request of his physician under “compassionate use” provisions — when an experimental medicine is provided on a case-by-case emergency basis, while studies of it continue.

“It’s all about beating the virus and so we’re just helping the natural immune system beat it, by supplementing it with this antibody cocktail,” said Dr. George Yancopoulos, the co-founder and president of Regeneron Pharmaceuticals.

The experimental therapy combines the use of two monoclonal antibodies, which work to inactivate  SARS-CoV-2, the virus that causes COVID-19, according to the company.

“Yesterday evening, (Trump) received his first dose of IV remdesivir and our plan is to continue a five-day treatment course for remdesivir,” Garibaldi told reporters on Saturday.

The treatment, which is sold by Gilead Sciences, is intended to shorten recovery time for coronavirus patients.

Remdesivir is not officially authorized by the U.S. Food and Drug Administration (FDA). But it has been given an emergency use authorization, which the FDA grants for treatment of illnesses “when there are no adequate, approved, and available alternatives.”

Several clinical trials have shown that patients taking the drug recover faster than those taking a placebo drug.

At the end of July, Health Canada authorized the use of remdesivir to treat patients with severe COVID-19 symptoms.

The drug is used in patients with severe pneumonia symptoms as a result of their coronavirus infection, and who require supplemental oxygen to breathe, Health Canada said.

Trump is also taking famotidine, according to the White House. This drug is commonly used to treat stomach ulcers, heartburn and acid reflux, according to the Mayo Clinic.  It is sold widely under the name Pepcid.

Trump’s doctor also announced the president is taking a vitamin D supplement, aspirin, zinc and melatonin. None of those have been proven to be effective against COVID-19.

— With files from the Associated Press and Reuters