WE HAVE gotten used to calling the most dangerous Covid variants “Kent”, “Indian” and “South African”.

But now new names have been to the Covid variants, including Delta for the strain that first emerged in India.

The naming system, from the World Health Organization (WHO), has been taken from the Greek alphabet.

The agency said it wanted to avoid stigmatising countries where new variants had popped up.

It hopes the new names will provide clarity – although many will find it further adds to the confusion.

Each variant now has three different names based on where it was first detected, its Greek name, and its scientific makeup.

The “Kent” variant, for example, is also now called Alpha as well as being known as B.1.1.7 among the scientific community.

But it’s hoped the Greek tags will become the default, once everyone gets used to them.

Not all variants have been given a name by the WHO – only those that are the most concerning or well established.

For example, the "Yorkshire variant" in England has not been included.

Neither has a new "Nepal variant" – which combines mutations in those from India and South Africa.

Here is everything you need to know about which variants are called what, from A-Z.

The UK strain first emerged in Kent in September and caused cases to surge despite the national lockdown in November.

It's up to 70 per cent more contagious than the original strain, which emerged in Wuhan, China, but has not been given a name by the WHO.

It quickly caused the third national lockdown in England before becoming dominant across the UK and later the world.

So it’s no surprise it also goes by the name of “Alpha”.

The Beta strain was announced by the South African government on December 18.

The UK’s Health Secretary revealed the new and “highly concerning” strain had entered Britain during a press briefing on December 23.

The South African strain is thought to be up to 50 per cent more transmissible.

However, it has not spiralled into large case numbers in the UK yet, although it was thought to be partially behind huge spikes in Europe in the spring.

Although scientists say there is a "hint" it is more deadly from studies in South Africa, where the strain is more dominant, there has been no clear evidence of this yet.

The Delta variant is rapidly becoming a problem in some parts of the world, including the UK.

Delta comes from a lineage called B.1.617, which first emerged in India. It is the second sublineage to have emerged, hence its name B.1.617.2.

B.1.617.2 was first found in India in December 2020 before Public Health England detected it in the UK in early May.

The strain is thought to have been behind record high case rates in India in April, and is now causing chaos in the UK by threatening to derail the lockdown lifting.

It is more transmissible than Alpha, between 30 and 100 per cent, which is why it has been able to become more dominant.

There are now also signs that it causes more severe disease.

Epsilon first caught the attention of scientists in November 2020 but had been around since June 2020.

Cases were centred in California, US, but Epsilon has since been detected in dozens of other countries. The UK has not seen any infections.

Scientists have previously described this variant as “the devil” because lab studies suggested it was “at least 40 per cent more effective at infecting human cells” and is deadlier.

However in the spring of 2021, it was outcompeted by the Alpha strain.

It now only accounts for no more than two per cent of cases in the US, according to the CDC.

Iota first reared its head in November in the US city of New York, which had been hard hit by Covid.

Dr Anthony Fauci, the director of the National Institute of Allergy and Infectious Diseases, said the variant likely originated in Washington Heights, a neighborhood in the uppermost area of Manhattan.

It was soon to blame for around a quarter of cases in the city while popping up in the rest of the US and 18 other countries.

Iota had gained a lot of traction in some states before, like the Epsilon strain, it was overtaken by the Alpha one and is now only seen in around 6 per cent of Covid cases in the US. 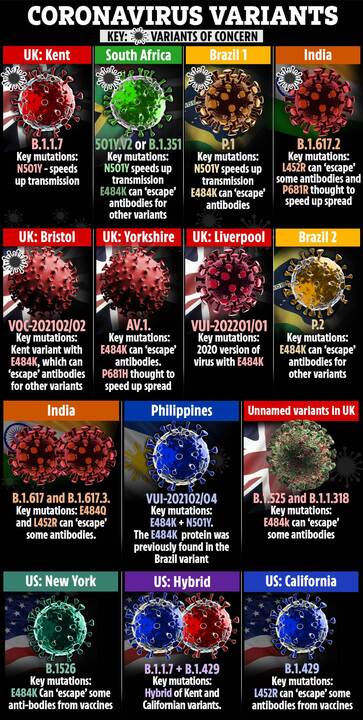 Gamma arose in the Brazilian city of Manaus in December, causing tragic loss of life.

It has spread largely in Latin America.

In early March, UK health bosses revealed they had detected six cases of the strain, leading to a surge testing blitz.

The variant has been described by Brazilian scientists as being able to reinfect people who have already recovered due to its immunity dodging mutations.

But it’s not been clear how this translates to other parts of the world.

Kappa is the first lineage of B.1.617 and was discovered in India back in October 2020.

Case numbers did not explode until several months later, in February 2021. A month later, the beginning of the country’s second wave started.

Although it is thought to be both fast-spreading and with vaccine escape, it is not considered as much of a concern as the related B.1.617.2.

India's Ministry of Electronics and Information Technology has previously ordered social media companies to remove all posts that refer to or imply an "Indian variant".

The Theta variant got its geographical name because it was first found in the Philippines in March.

The nation has been battling a second wave since then, but it’s unclear what impact Theta had.

Theta also entered the UK a couple of weeks later, with one case related to international travel. But it’s not been detected more than six times since.

Another variant first found in Brazil now goes by the name of Zeta.

Like the others that have evolved, this variant has features that may make it spread more easily and dodge immunity.

It evolved in Rio de Janeiro separately to the P.2 variant in Manaus.

Since its arrival in the UK, experts say it is not a cause for concern.

While it also carries worrisome mutations, Zeta does not contain an important one called E484K which is carried by the other Brazilian-found variant Gamma.