‘Wicked Witch of the West’ who came back to haunt Liz: How Harriet Hageman went from Cheney’s ‘friend’ to Trump candidate who railed against climate change and the 2020 election

She has been a fierce critic of Liz Cheney throughout their battle to win the Republican primary in Wyoming.

But Harriet Hageman and former Vice President Dick’s daughter were once close allies and even billed themselves as ‘friends’.

The state’s new House representative worked on her now rival’s US Senate campaign in 2014 and introduced her on stage as a ‘proven, courageous conservative’.

Yet their relationship soured in recent years, with Hageman launching numerous tirades against her competitor over the last few weeks.

Hageman herself has seen her fair share of criticism, being branded the ‘Wicked Witch of the West’ for often appearing in all-black outfits.

The 59-year-old has also been repeatedly targeted for her climate change denial stance, as well as her loyalty to former president Donald Trump.

But it appeared not to bother voters in Wyoming on Tuesday night as she defeated Cheney in the fiercely-contested primary.

The ousted Cheney was already looking ahead to a political future beyond Capitol Hill that could include a 2024 presidential run. 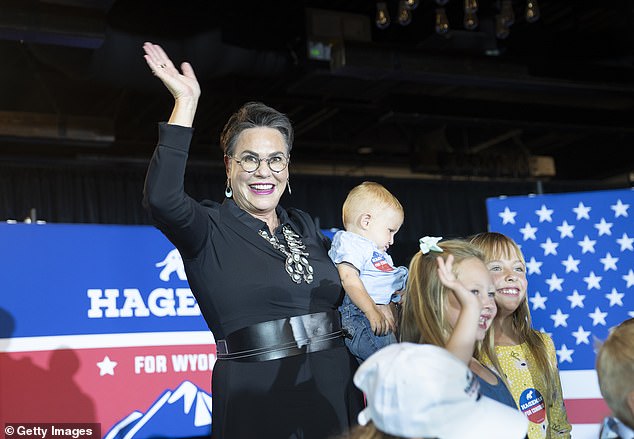 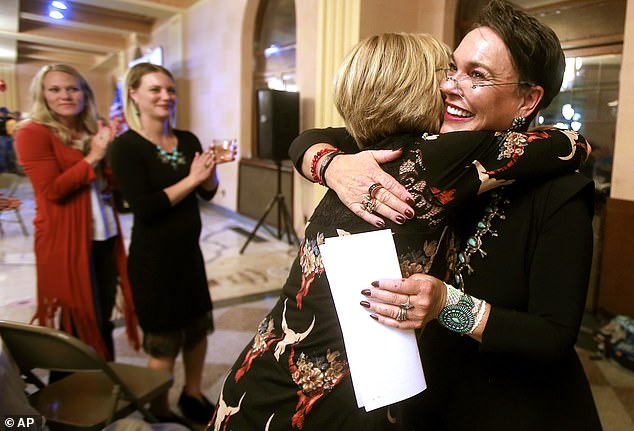 Hageman hugs her sister-in-law, Lee Hageman after arriving at her watch party on Tuesday in Cheyenne

Cheney and Hageman are seen in 2016, when Hageman campaigned for Cheney as she ran for Congress 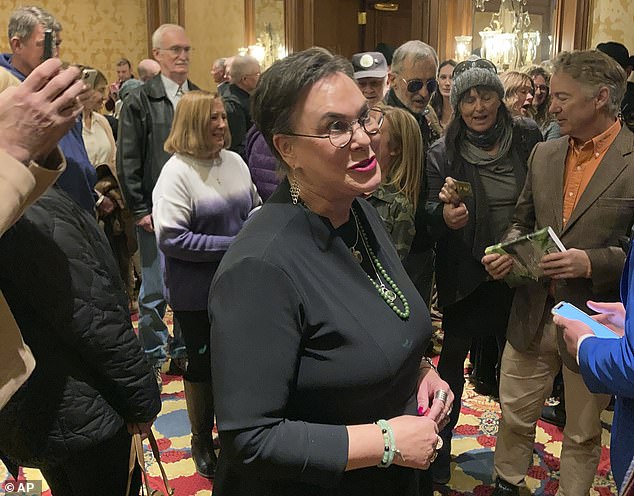 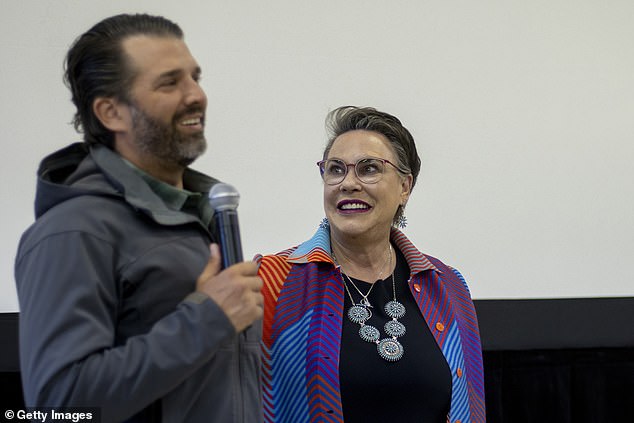 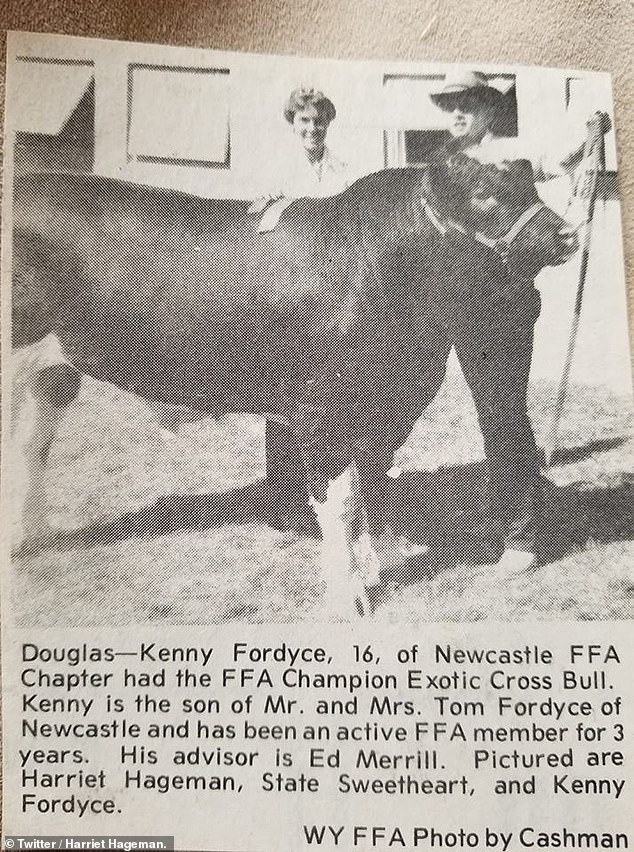 Hageman tweeted this photo of her when she was ‘state sweetheart’

Hageman was born into a Wyoming farming background and grew up on a ranch near Fort Laramie.

She obtained her bachelor of science in business administration in 1986, and a juris doctor from the University of Wyoming College of Law in 1989.

She worked in the private sector in Wyoming, Nebraska and Colorado over the next few years and served as a law clerk and federal appeals judge.

Her specialism is natural resources, and she went on to co-found Wyoming Conservative Alliance in 2004.

They reportedly sought to ‘increase public participation at both the state and federal regulatory level’.

Her most significant victory was in 2003, when she managed to win an injunction on Clinton-era federal regulations to protect millions of acres of National Forests from road-building, mining and other development.

She also represented groups that sought to remove protections for the gray wolf under the Endangered Species Act.

Hageman has long fought for states to have control over more land – a position which critics say would put millions of acres of hiking trails, fishing spots and prized hunting lands at risk.

‘She has a long reputation among the conservation and sportsman groups of being an anti-federalist, particularly when it comes to ownership of land,’ said Dan Smitherman, the Wyoming state director at the Wilderness Society.

He told The New York Times: ‘Most of the main conservation groups and probably 50 to 60 percent of the sportsman groups assume we’ll be playing defense against her when it comes to public land issues and perhaps some issues like wolves and bears.’

It’s a different version of her from in 2016 when she supported Cheney – who was running for the House for the first time – and was actively working against Trump.

Hageman went to the 2016 Republican National Convention in Cleveland as a delegate for Ted Cruz and was part of a group of Republicans who wanted to ‘unbind’ delegates, in a last-ditch effort for Trump to lose the nomination.

The effort didn’t work and when The New York Times highlighted Hageman’s participation in it in September 2021, she said she had been fooled.

‘I heard and believed the lies the Democrats and Liz Cheney’s friends in the media were telling at the time, but that is ancient history as I quickly realized that their allegations against President Trump were untrue,’ she told the paper.

‘He was the greatest president of my lifetime, and I am proud to have been able to renominate him in 2020.

‘And I’m proud to strongly support him today.’ 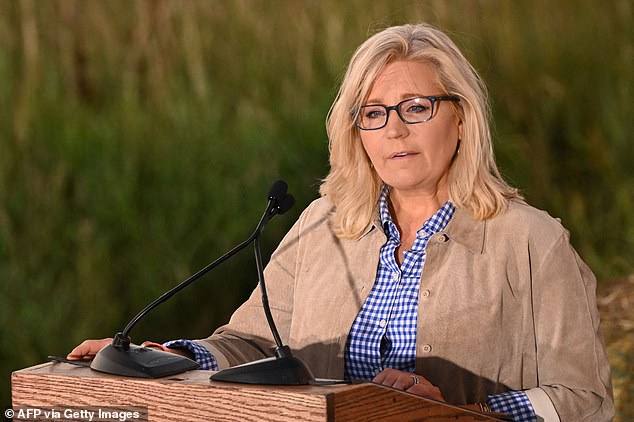 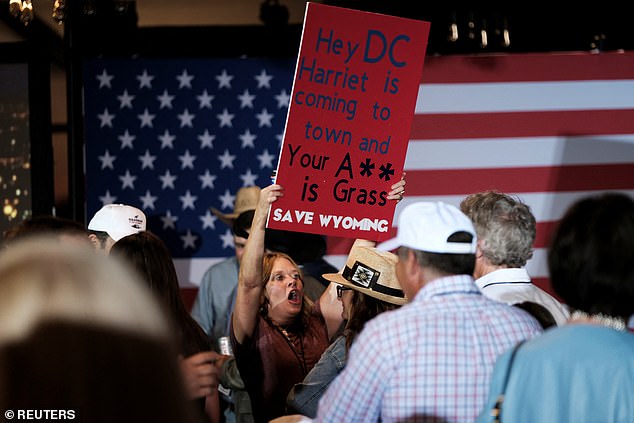 Mary Fichtner, Hageman’s college best friend who has volunteered with the campaign, holds a poster during the primary election night party of the GOP winner

After winning the vote on Tuesday night, Hageman supporters gathered at a rodeo and Western culture festival in Cheyenne, many wearing cowboy boots.

‘Obviously we’re all very grateful to President Trump, who recognizes that Wyoming has only one congressional representative and we have to make it count,’ she said.

The results were a powerful reminder of the Republican Party’s rapid shift to the right.

A party once dominated by national security-oriented, business-friendly conservatives like Cheney’s father now belongs to Trump, animated by his populist appeal and, above all, his denial of defeat in the 2020 election.

Such lies, which have been roundly rejected by federal and state election officials along with Trump’s own attorney general and judges he appointed, transformed Cheney from an occasional critic of the former president to the clearest voice inside the GOP warning that he represents a threat to democratic norms.

Trump and his team celebrated Cheney’s loss from afar, having spent much of the day railing against the FBI on social media.

Trump called Cheney’s loss ‘a complete rebuke’ of the House committee investigating the January 6, 2021, attack on the U.S. Capitol.

Cheney is the panel’s vice chair. 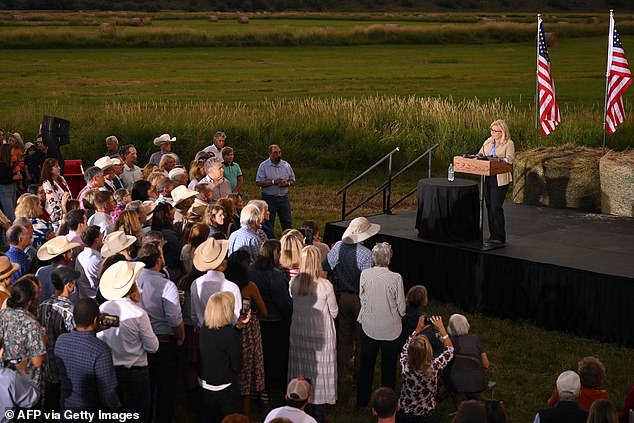 Cheney spoke to supporters outside Tuesday night at the Mead Ranch in Jackson, Wyoming 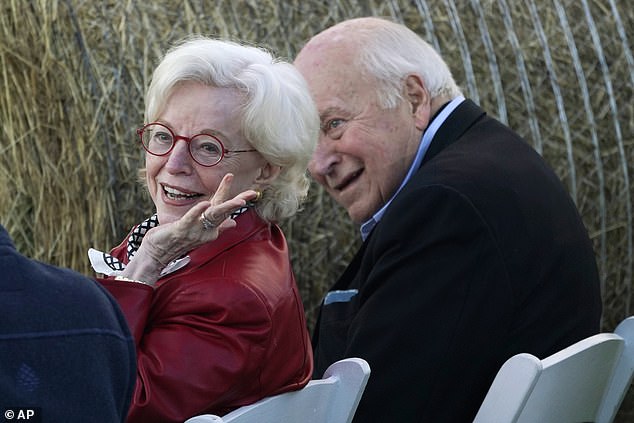 Cheney’s mother Lynne and father, former Vice President Dick Cheney, sat in the audience as she delivered her concession speech

‘Liz Cheney should be ashamed of herself, the way she acted, and her spiteful, sanctimonious words and actions towards others,’ he wrote on his social media platform.

‘Now she can finally disappear into the depths of political oblivion where, I am sure, she will be much happier than she is right now. Thank you WYOMING!’

Cheney’s defeat would have been unthinkable just two years ago.

The daughter of a former vice president, she hails from one of the most prominent political families in Wyoming.

And in Washington, she was the No. 3 House Republican, an influential voice in GOP politics and policy with a sterling conservative voting record.

But after the January 6 assault on the U.S. Capitol by a mob of Trump supporters, Cheney voted to impeach Trump and made it her primary mission to ensure he never again serves in the Oval Office.

She pushed past GOP censures and death threats to serve as a leader on the congressional panel investigating Trump’s role in the insurrection.

Cheney will now be forced from Congress at the end of her third and final term in January.

Hageman campaigned on a promise to reduce the role of federal government in the state. At a lunch the week before the election, for Rock Springs chamber of commerce – in a town dominated by fossil fuels – she vowed to push back against federal regulation.

‘I think we need to make the federal government largely irrelevant to our everyday lives,’ Hageman said. 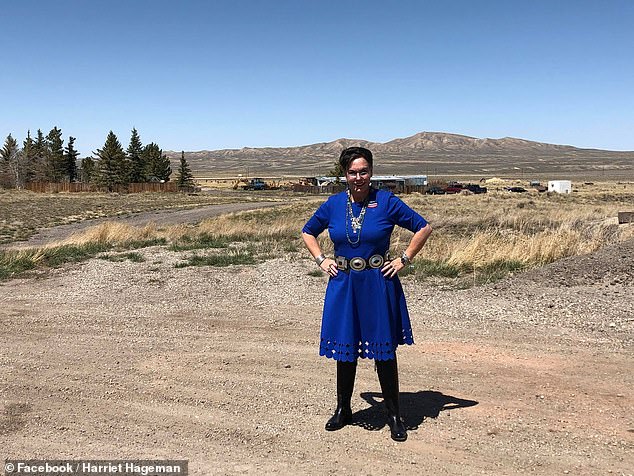 Hageman made her name as a lawyer, pushing back against federal environmental regulations

Tim Murtaugh, a spokesman for Hageman, said on Tuesday before the polls closed that, if elected: ‘Harriet Hageman will make fighting against the administrative state her signature issue in Congress, because Wyoming is often targeted by the federal government, which attacks its resource industries and controls too much of its land.’

Cheney is not expected to leave Capitol Hill quietly.

She will continue in her leadership role on the congressional panel investigating the Capitol attack until it dissolves at the end of the year.

And she is actively considering a 2024 White House bid – as a Republican or independent – having vowed to do everything in her power to fight Trump’s influence in her party.

Tuesday’s primary contests in Wyoming and, to a lesser extent, Alaska demonstrated the enduring strength of Trump and his brand of hard-line politics ahead of the November midterm elections.

So far, the former president has helped install loyalists who parrot his conspiracy theories in general election matchups from Pennsylvania to Arizona.

In Alaska, another Trump ally, former Governor Sarah Palin, hoped to step into the national spotlight on Tuesday as well.

The 58-year-old 2008 vice presidential nominee was actually on the ballot twice: once in a special election to complete former Rep. Don Young’s term and another for a full two-year House term starting in January.

On the other side of the GOP’s tent, a periodic Trump critic, Senator Lisa Murkowski, had an opportunity to survive the former president’s ire, even after voting to convict him in his second impeachment trial.

The top four Senate candidates in Alaska, regardless of party, will advance to the November general election, where voters will rank them in order of preference.

With Cheney’s loss, Republicans who voted to impeach Trump are going extinct.

In all, seven Republican senators and 10 Republican House members backed Trump’s impeachment in the days after his supporters stormed the U.S. Capitol as Congress tried to certify President Joe Biden’s victory.

Just two of those 10 House members have won their primaries this year.

After two Senate retirements, Murkowski remains the only such Senate Republican on this year’s ballot.

In Wyoming, Cheney had been forced to seek assistance from the state’s tiny Democratic minority. 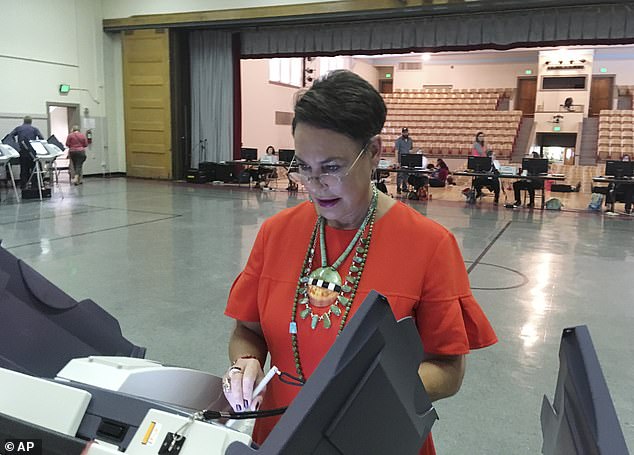 Hageman is seen on Tuesday casting her vote in Cheyenne

But Democrats across America, major donors among them, took notice.

She raised at least $15 million for her election, a stunning figure for a Wyoming political contest.

But the makeup of Wyoming’s deeply Republican electorate was too much to overcome.

If Cheney does ultimately run for president – either as a Republican or an independent – don’t expect her to win Wyoming’s three electoral votes.

‘We like Trump. She tried to impeach Trump,’ Cheyenne voter Chester Barkell told AP of Cheney on Tuesday.

And in Jackson, Republican voter Dan Winder said he felt betrayed by his congresswoman.

‘Over 70 percent of the state of Wyoming voted Republican in the last presidential election and she turned right around and voted against us,’ said Winder, a hotel manager.

‘She was our representative, not her own.’

There was no sign that the FBI’s recent search of Trump’s Florida estate played any role in Tuesday’s elections.

Republicans across the country initially rallied behind the former president, although the reaction turned somewhat mixed as more details emerged.

Anti-Trump Republicans across the country cheered Cheney’s willingness to challenge Trump even as they expressed disappointment in her loss.

‘What’s remarkable is that in the face of almost certain defeat she’s never once wavered,’ said Sarah Longwell, executive director of the Republican Accountability Project.

‘We’ve been watching a national American figure be forged.

‘It’s funny how small the election feels – the Wyoming election – because she feels bigger than it now.’