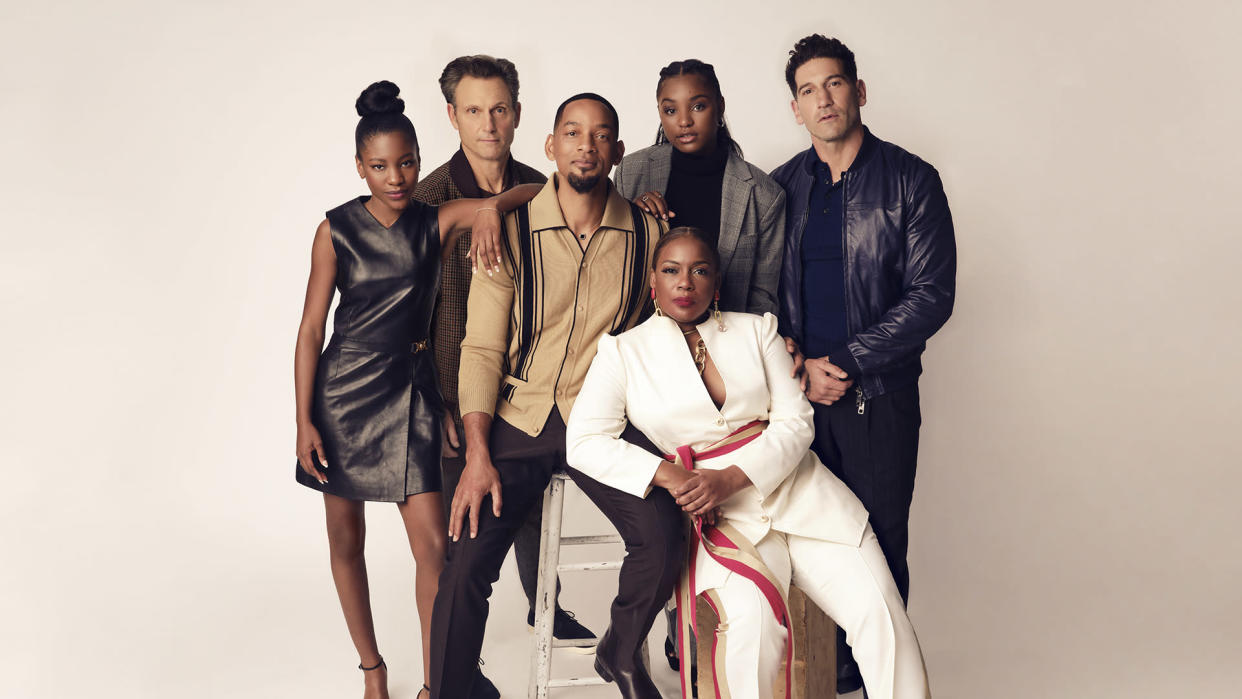 Will Smith learned a lot about building a family on his first television show, “The Fresh Prince of Bel-Air.” And now that he’s starring in “King Richard” as the patriarch of the Williams family and father to tennis phenoms Venus and Serena Williams, he understands how those off-screen relationships are often reflected on-screen.

Directed by Reinaldo Marcus Green with a script by Zach Baylin, “King Richard” details the rise of the sisters while showing the enormous influence and support that came from their family. That includes the outspoken, often controversial Richard but also their equally determined mother, Oracene “Brandy” Price. While not every actor can hold their own opposite two-time Oscar nominee Smith, the film has assembled a lineup of new and established talent that worked together seamlessly. Smith admits his heart jumped when Green suggested Aunjanue Ellis for Oracene. And relative newcomers Saniyya Sidney as Venus and Demi Singleton as Serena are true discoveries in roles that challenged them emotionally and physically — neither had played tennis before landing the parts. Rounding out the cast are Tony Goldwyn as Paul Cohen and Jon Bernthal as Rick Macci, two coaches integral to the Williams’ sisters success who also often found themselves at odds with Richard.

Variety spoke with the actors about how they came to their roles, the danger of “catching a jerk” in the cast and how they got to be a family — a visit to Soul Cycle was involved.

I want to talk about how the ensemble came together. Will, I believe I began with you? What did you know about Richard Williams prior to reading this script?
Will Smith: I knew only the public vilification; the Richard Williams antics that were captured over the years. And I agreed with Richard most of the time — especially once I had children of my own. And Richard Williams is very similar to my father. So I knew about the public persona. But I always had a sense that something else was going on there. And when I read Zach Baylin’s screenplay, which was as good a screenplay as you ever hoped to read, I was very excited about the possibility of being able to dive into the mind of Richard Williams and the inner workings of the familial relationships.

How much say , if any, did you have in casting?
Smith: At this point in my career, I try to stay out of those things. I’ve been so hands-on for my career. Then the past seven or eight years I’ve been sitting back and allowing the filmmaker to tell me what I should do and to tell me what they see. And it’s been working well!

OK, but when someone first said the name Aunjanue Ellis, what was your first thought?
Smith: I was like: Aunjanue got skills! When Rey [director Reinaldo Marcus Green ] said her name, my heart jumped. I’m always imagining being in scenes with actors and I want somebody that’s going to push me and challenge me and not allow me to fall back on my tricks. Aunjanue referred to our scene in the kitchen as Ali versus Frazier.

Are you Ali or Frazier? Because I have to say, I think in this case, Oracene wins.
Smith: I was Ali in the left hook shot, the first Frazier knock down when Frazier planted Ali on his back and broke his jaw.
Aunjanue Ellis: (Laughing.) You know, I regret that reference. I didn’t think that through. We were fighting though, we were in the cage that day.

Aunjanue, I believe you said you went to Will’s house and auditioned with him there?
Ellis: I did, further down the line. It started off with me just reading with my sister in Mississippi on a tape, all that stuff that everybody does now. They asked for a chemistry read with Will and I had to leave my job in Atlanta and get on a plane and go out there. I couldn’t even change my clothes. You know how you have those gates in front of your house, Will? Well I was in the car right outside them, brushing my teeth, spitting on your grass. That toothpaste you saw in your grass? That was me! But I went inside his beautiful home and they fed me and it was lovely — though they still didn’t tell me whether I had the job or not, but they fed me.

Saniyya and Demi, as the youngest members of the cast, what did you know about Venus and Serena?
Demi Singleton: I’m kind of similar to what to what Mr. Will said, I knew what was in the media — that they were tennis icons and that people thought he was crazy. That was really it.
Saniyya Sidney: My family’s a big sports family, so Venus and Serena really inspired me when I was little. They were my childhood heroes. But I only knew them as champions, I didn’t really know their story. When I got the opportunity to audition, I was looking so forward to it. And during that process I got to know Venus as a person. She’s a champion, but she’s also a beautiful young woman with a beautiful family. Learning more and more, I wanted the role so bad. I wanted to tell this story.

Jon, you’ve said before that you really pursued the role of Rick Macci even though the director needed some convincing.
Jon Bernthal: I just loved the script. It explores the nooks and crannies of fatherhood and family and faith and you know, it’s not sentimental. It’s not afraid to be ugly at times. And I think that goes hand in hand with parenting in general. Then I met Rey and loved him. Every step of the way was another inspiration and it made going to work so joyous. You really felt a part of something special.

Tony, you’ve been a part of so many wonderful ensembles. Do you think that’s something that attracts you?
Tony Goldwyn: To me, the size of the part doesn’t matter at all, it’s who I’m working with and the material. When I was younger, I thought I was supposed to be making decisions out of some sort of business strategy: “I can’t take that role, it’s not big enough for me.” Or if I took a smaller part, I’d be backsliding in my career. That’s what the voices in your head or the advisers can say. In my late 30s, I realized that it’s all about the material I respond to and who I’m working with and it’s made for a much richer experience.

The actors playing the Williams family truly do feel like one; how did that develop? Did you get to spend any time together before shooting?
Sidney: We had a lot of time. During pre-production, we were rehearsing with one another and Demi and I were taking tennis lessons. We’d all hang out and go through the script together, have conversations in character. Demi and I would go shopping and just do the girliest things.
Singleton: I dragged her to Soul Cycle along with the other kids in the family. They really didn’t like it.
Sidney: I beg to differ. I loved it. I just … wouldn’t do it again right now.
Ellis: I didn’t meet them until the rehearsal room and just adored them instantly. They’re kind of easy to love.
Smith: There’s a lesson I learned working on “The Fresh Prince of Bel-Air.” When you play a family, you kind of naturally start to fall into your on-camera roles off-camera, and it’s hugely important to set the right mood and tone off-camera, so you’re not having to make big giant transitions when action happens. So we fell into these roles pretty quickly. We found ourselves celebrating birthdays together and hanging out and having meals together. Every once in a while you can catch a jerk, you know. You get one thrown into the middle of these groups. And it can be wildly disruptive. And that didn’t happen. What you see on camera is a reflection of the interactions that were happening off-camera. Sometimes Rey would roll and we didn’t know so a lot of the things that ended up on film were the girls just having a conversation. It was a beautiful mirror image of what the off-camera experience was.

Jon and Tony, your characters are both very protective of Venus and Serena; did you find that extending into real life?
Bernthal: Protective, sure, but it was more about celebrating them. I was staggered by their commitment, their joy, their professionalism. Everybody there had such a good and supportive family. And working with Demi and Saniyya, I just loved making them laugh. I didn’t even care if they were laughing at me, that was fine!
Goldwyn: I’m a dad, I have two girls myself, so I always love working with young actors. There’s two types of young actors — one is children who can deliver a performance; they can memorize lines and their parents or a coach helps them. Then there are young people who are really actors and saints. They can think abstractly and be in the present and live the life of the character. And those are the exciting ones to work with. Saniyya and Demi definitely fall into that category. And it can be very humbling to work with young actors because it reminds you how the best work is achieved by really just being present and open and having an open heart.

Demi and Saniyya, you’ve had some prominent co-stars in the past. But this is a cast of true greats. Was it ever intimidating?
Sidney: It was more like: “Oh, man, what’s going to happen next?” Everyone would just throw things in there and improvise and it was so much fun. And Mr. Will gave us all the freedom just to go there. Every day was better than yesterday.
Singleton: I think the word I would use at first is starstruck. For maybe the first week of filming. But honestly, everyone was so kind, there was no need to feel intimidated.

Will, you must be aware that when you come on a set people might be a little in awe at first. How do you diffuse that? Or do you not worry about it?
Smith: You know, I really don’t think about it in in those terms. My children broke me of any illusion that I had that I was special. Or any illusion that I was cool. You know, people work for 12-16 hours a day and when my name is on a movie, I take it very seriously. It has to line up with my values, and a major part of my values are taking care of people that are dedicating a big chunk of their life to this creation. That means two things to me. First, we have to be doing something worthwhile. I don’t ever want my name on something that I’m asking somebody to be a part of that doesn’t have a contribution to the human family. And then secondly, if we’re going to be asking people to spend that much time, it’s important that they feel loved and cared for and honored in the process, because it’s going to be hard.

It’s going to be very difficult, and people are going to be pushed, and you just have to feel cared for. So people are above product, for me. And that hasn’t always been true for me in my career. So the most important thing for me is that everybody walked away from this feeling like they didn’t squander a piece of their lives for some crap. I take that as my responsibility.