This is the heartwarming moment a mother-of-two danced alongside her moving car to celebrate completing her last chemotherapy session.

Lisa Coxon, 35, pictured, from Tean, Staffordshire was diagnosed with breast cancer in August 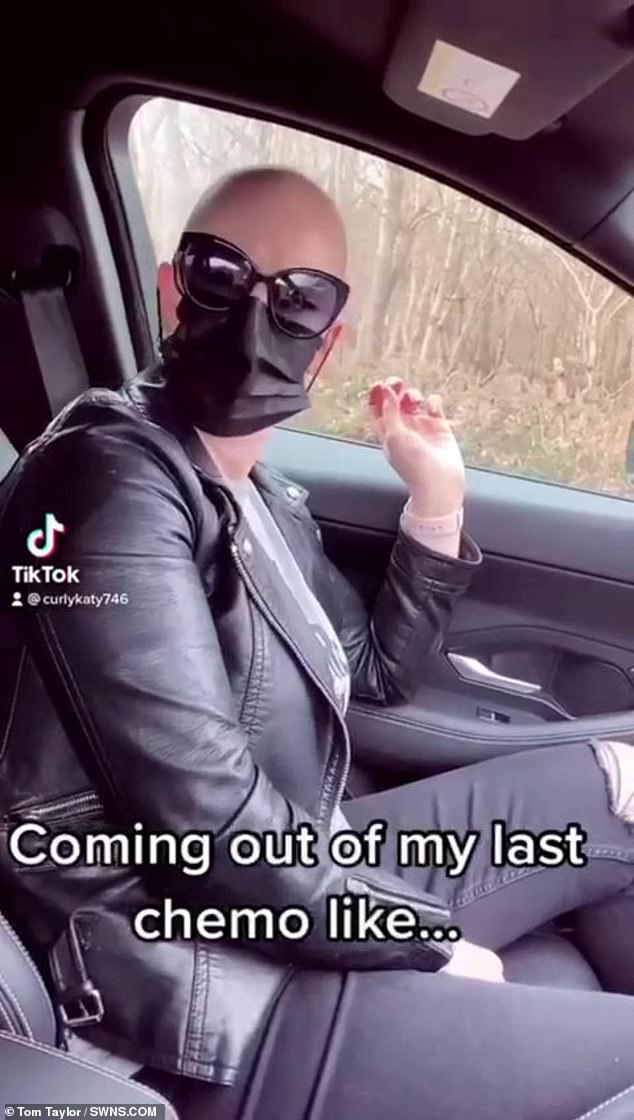 The mother-of-two, pictured, celebrated reaching the end of her six courses of chemotherapy with an energetic TikTok dance

And to celebrate completing her final session last week, she filmed herself stepping out of a moving car to do a dance routine, looking cool in her leather jacket and shades.

The stunt was filmed by her brother Tom Taylor, 30, who was in the backseat of the car being by a family friend, in her bubble, on a private road.

She now faces radiotherapy and a double mastectomy to reduce the chance of the cancer returning.

Ms Coxon from Tean, Staffordshire, said it was a substitute for a ‘ringing the bell’ to signify the end of her chemotherapy which couldn’t take place because of Covid.

She said: ‘When I was diagnosed, the odds were stacked against me because I have such a rare form of breast cancer.

‘It was a very difficult time, made more difficult by lockdown, but I got through it with my family by my side.

‘I wanted to film that video as my “ringing the bell” moment – a bit of fun to keep spirits high and mark the occasion before I move onto the next chapter.

‘Despite the challenges, I’ve always tried to face the situation with a positive attitude and remain strong – and this was no different!’ 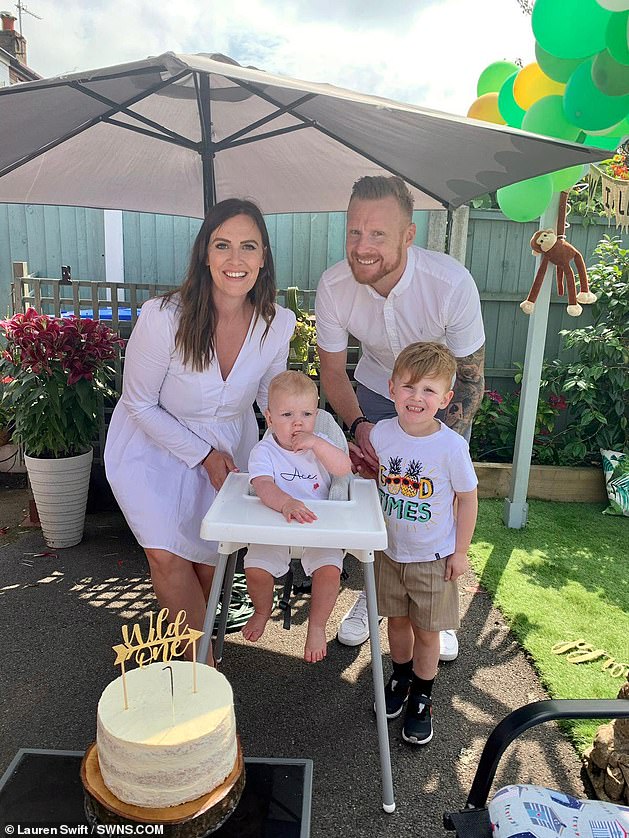 Lisa Coxon, pictured left before her cancer diagnosis with her husband Jordon, right and sons Jax, five, and Ace, 18 months, was unable to ring the bell in the hospital to signify the end of her treatment because of Covid-19 restrictions

Ms Coxon, who lives with engineer husband Jordan Coxon, 37, and their two sons Jax, five, and Ace, 18 months, was diagnosed after she found a lump under her arm.

Initially she was told her rare form of cancer may be resistant to treatment and felt ‘the odds were stacked against her’ when she began chemotherapy weeks later.

What is triple-negative breast cancer?

These results mean the growth of the cancer is not fuelled by the hormones oestrogen and progesterone, or by the HER2 protein.

Studies are trying to find out whether certain medications can interfere with the processes that cause triple-negative breast cancer to grow.

She said the six month course of treatment was ‘worse than anything I’ve ever experienced before’.

She added: ‘On top of that, I had to go through it on my own because of Covid, so it was a really tough time overall.’

Ms Coxon completed her final session on March 5 but couldn’t ‘ring the bell’ to signify the end of her treatment due to sharing a ward with terminal cancer patients.

So the positive-minded mum decided to commemorate the moment in her own way ahead of her final session with her dancing video which she put on TikTok.

She said: ‘Finishing chemo is always going to be a memorable moment, regardless of how you celebrate, but I wanted to do something positive to close that chapter for myself.

‘It was a logistical nightmare to film because we kept missing my head from the frame.

The mother-of-two will eventually have a mastectomy and radiotherapy treatments after she has recovered from the tough chemotherapy.

She said: ‘It’s a long journey to recovery for me, and we don’t know exactly what will happen in the future, but I’ve always tried to remain strong and positive.

‘I think being a strong person is the reason why I joined the police force in the first place.

‘I’ve tried to face this entire situation with a positive mindset and see the good in things.

‘There’s always something to be positive about if you just take each day as it comes – and right now I’m just pleased to have finished chemo!’

According to the Stoke Sentinel, she was initially diagnosed with tennis elbow in May, after which she found a lump under her armpit.

An MRI scan then found the cancer had spread from her breast and into her lymph node.

She said: ‘I was on maternity at the time and that was all adding to my anxiety.

Ms Coxon, right, pictured with her son Ace, was treated for a rare form of breast cancer

‘My cancer had got quite bizarre features so they weren’t sure how I was going to respond to the chemo at first but luckily the cancer in the breast has responded really well.

‘I’ve done six months of chemotherapy every three weeks. I’ve got to have surgery to have the lymph nodes removed because there is still cancer in the lymph nodes so I will have those removed and have a mastectomy.

‘I’ve got to have the other breast removed as a preventative measure because of the high risk of it coming back and going to my ovaries. It’s a bit of a long road ahead.’

She said dealing with cancer has been difficult as some days she felt like she did not want to get out of bed and praised her support bubble.

She urged people to get out and get checked if they find a lump or have a fear about their health.