A DOG owner has been left internet users stunned after they saw a shape of a penis in a tattoo of her beloved pooch.

The woman’s horrified realisation led her to post a picture online to seek a second opinion to sort out the canine confusion. 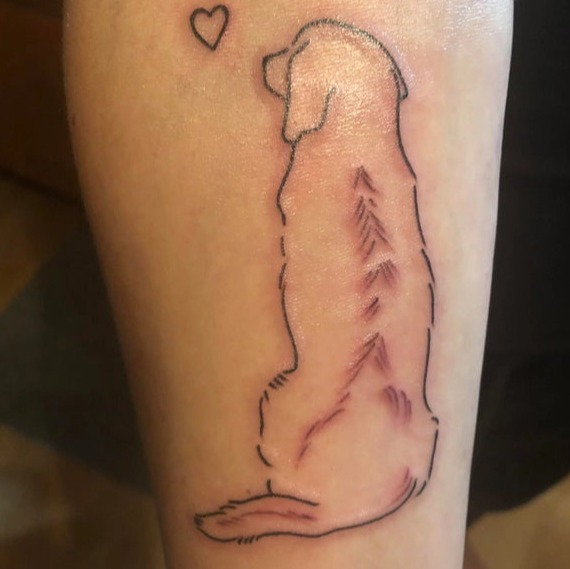 “Does my tattoo look like a d**k?” she pondered on Reddit, adding “that’s what my boyfriend said” but “just got to get that honest opinion”.

The reactions came thick and fast, with one user saying: “IMO your dog is vaguely dick shaped.”

“Sorry to break it to you, man, but that’s the first thing I saw – I think it might be the redness and lack of shading that’s making me think that,” said another.

A common theme was that while the dog may look like a penis, the addition of a bit of fur could solve the problem.

The dog looked like a penis a “little, but nothing too bad” but “if it bothers you maybe get more fur texture added?” wrote one user.

Others gave a more balanced view, pointing out you see can see what you want to see.

“It can definitely be a d**k if that’s how you want to see things. But it’s also not one of those things where once you see a d**k, you can’t un-see it.”

It comes after a man got an innocent elephant tattoo that looked very rude when he wears a pair of shorts.

A picture of a detailed and expertly-designed tattoo on a man's upper thigh had people in stitches.

In another picture of him with his shorts pulled down, the top half of the tattoo is cut off showing the just the trunk of the elephant – and which could be easily mistaken for something else.

The photo was captioned: "My colleague was super happy with his elephant tattoo until he put on a pair of shorts."