The vote on Monday afternoon saw the 71-year-old win in a landslide after a fortnight of campaigning, with a majority of 377 out of 534 MPs and delegates from the Liberal Democratic Party backing his ascent to the Kantei.

He is expected to be formally declared prime minister after a parliamentary vote on Wednesday, where the LDP has a ruling majority. 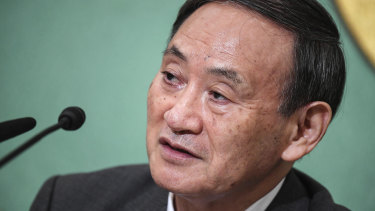 Abe, Japan's longest serving prime minister and a key figure in international relations resigned on August 28, after a prolonged battle with a chronic illness. He apologised to the Japanese people for not being able to give the coronavirus crisis his full attention as the economy struggles to bounce back and the country prepares for an Olympics in 10 months' time.

Suga, who announced his candidacy on September 2, ran on a platform of continuing Abe's stimulatory economic policies and diplomatic engagement with allies across the Indo-Pacific region.

He highlighted the Japan-US alliance and said it needed to be “further deepened” at the beginning of his campaign, in comments welcomed by Australian policymakers as geo-political tensions increase with China.

The son of a strawberry farmer is only the fourth post-war prime minister not to have come from a political family in a country still dominated by political dynasties.

His journey to the Prime Minister's Office in Tokyo started in university politics. He was elected to the Yokahama City Council in 1987, before joining the Japan's Parliament, the Diet, less than a decade later. The political veteran was at Abe's side throughout his time in office as the chief cabinet secretary and the government's top spokesman.