Ukraine is ready for a tough battle with Russian forces amassing in the east of the country, President Volodymyr Zelenskiy said on Saturday, and British Prime Minister Boris Johnson paid him a visit to offer fresh financial and military aid.

Johnson was the latest foreign leader to visit Kyiv after Russian forces pulled back from areas to the north of the capital just over a week ago. His visit was not previously announced.

Earlier in the day, the Ukrainian leader met Austrian Chancellor Karl Nehammer in Kyiv, warning in a joint news conference that while the threat to the capital has receded, it is gaining in the east.

“Yes, (Russian) forces are gathering in the east (of Ukraine),” Zelensky said.

“This will be a hard battle, we believe in this fight and our victory. We are ready to simultaneously fight and look for diplomatic ways to put an end to this war,” Zelenskiy added.

Air-raid sirens sounded in cities across eastern Ukraine, which has become the focus of Russian military action after a withdrawal from areas close to Kyiv. 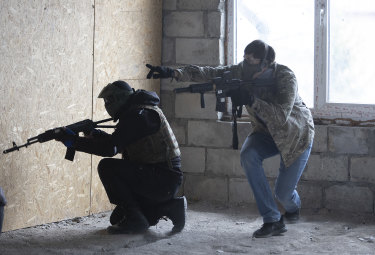 Civilians use air rifles to train for possible urban combat at a facility in Lviv.Credit:

Ukrainian officials have urged civilians in the east to flee. On Friday, officials said more than 50 people were killed in a missile strike on a train station in the Donetsk region city of Kramatorsk, where thousands of people had gathered to evacuate.

Russia’s invasion, which began on February 24, has forced around a quarter of the population of 44 million to leave their homes, turned cities into rubble and killed or injured thousands.

The civilian casualties have triggered a wave of international condemnation, in particular over deaths in the town of Bucha, a town to the northwest of Kyiv that until last week was occupied by Russian forces.

“We will never forget everything we saw here, this will stay with us for our whole lives,” said Bohdan Zubchuk, a community policeman in the town, describing his life before and after the war.

Russia has denied targeting civilians in what it calls a “special operation” to demilitarise and “denazify” its southern neighbour. Ukraine and Western nations have dismissed this as a baseless pretext for war.

Johnson tweeted that he met Zelensky to set out a package of financial and military aid to show “our commitment to his country’s struggle against Russia’s barbaric campaign.”

Friday’s missile attack at the station in Kramatorsk, a hub for civilians fleeing the east, left shreds of blood-stained clothes, toys and damaged luggage strewn across the station’s platform.

City Mayor Oleksander Honcharenko, who estimated 4,000 people were gathered there at the time, said on Saturday that the death toll had risen to least 52.

Russia’s defence ministry denied responsibility, saying in a statement the missiles that struck the station were used only by Ukraine’s military and that Russia’s armed forces had no targets assigned in Kramatorsk on Friday.

Russian state television described the attack as a “bloody provocation” by Ukraine.

In Washington, a senior defence official said the United States did not accept the Russian denial and believed Russian forces had fired a short-range ballistic missile in the attack.

Reuters was unable to verify the details of attack. 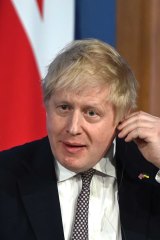 Boris Johnson was the latest foreign leader to visit Kyiv.Credit:

Honcharenko said he expected just 50,000-60,000 of Kramatorsk’s population of 220,000 population to remain within a week or two as people flee the violence.

The Ukrainian military says Moscow is preparing for a thrust to try to gain full control of the Donbas regions of Donetsk and Luhansk that have been partly held by Moscow-backed separatists since 2014.

Air attacks are likely to increase in the south and east as Russia seeks to establish a land bridge between Crimea – which Moscow annexed in 2014 – and the Donbas but Ukrainian forces are thwarting the advance, the British Defence Ministry said in an intelligence update.

Russia’s military said on Saturday it had destroyed an ammunition depot at the Myrhorod Air Base in central-eastern Ukraine.

A forensics team began exhuming a mass grave on Friday containing the bodies of civilians who local officials say were killed while Russians occupied the town.

The Kremlin has repeatedly rejected accusations it has committed war crimes and has called allegations that its forces executed civilians in Bucha a “monstrous forgery”.

The visits by foreign leaders and an announcement by Italy that it intends to re-open its embassy in Kyiv later this month were a fresh sign that the city is returning to some degree of normality.

Some Ukrainians have also begun returning to the capital, with cafes and restaurants reopening.