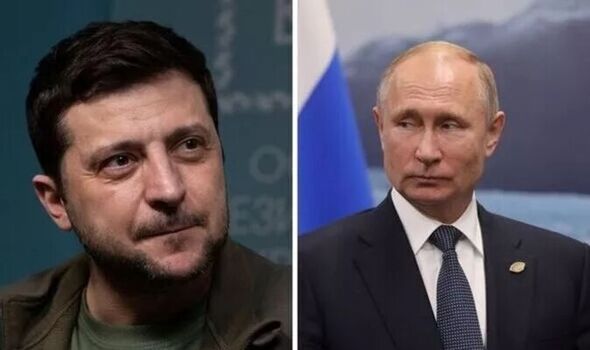 The Ukrainian president accused Russia’s Vladimir Putin of wanting to turn his countrymen and women into “silent slaves” as his troops try to kill as many people as possible.

He called for a tribunal similar to the trials that brought the Nazis to justice for anyone involved in the current atrocities.

It follows the discovery of mass graves in the wake of the Russian retreat from the town of Bucha, about 37 miles from the capital Kyiv, and other areas.

Bodies had hands tied behind their backs while women and children had been raped and murdered, Mr Zelensky said.

Meanwhile, in the face of a Kremlin information blackout, Prime Minister Boris Johnson said the crimes were “so sickening”, ordinary Russians would not support Putin’s war if they knew what was happening.

In a video address to the Russian people yesterday, he urged them to find out the truth about the Ukraine atrocities.

He said the reality on the ground was “sickening” and “a stain on the honour of Russia”.

Speaking in Russian at the beginning of the video, Mr Johnson said: “The Russian people deserve the truth, you deserve the facts.”

Then, switching to English, he said: “The atrocities committed by Russian troops in Bucha, Irpin and elsewhere in Ukraine have horrified the world.

Civilians massacred, shot dead with their hands tied, women raped in front of their young children, bodies crudely burned, dumped in mass graves, or just left lying in the street.

“The reports are so shocking, so sickening, it’s no wonder your government is seeking to hide them from you. Your president knows that if you could see what was happening, you would not support his war.

“He knows that these crimes betray the trust of every Russian mother who proudly waves goodbye to her son as he heads off to join the military.

“And he knows they are a stain on the honour of Russia itself, a stain that will only grow larger and more indelible every day this war continues.”

Mr Zelensky told the United Nations Security Council some people had their tongues cut out and Moscow was creating “mass starvation” in besieged cities.

He warned the Russian military was blowing up shelters where civilians were hiding and throwing people into wells.

The president added: “Bucha is only one example of the horrors the occupiers have unleashed.”

Officials said the bodies of at least 410 civilians were found around Kyiv and a “torture chamber” was discovered in Bucha.

Mr Zelensky said civilians had been shot in the back of the head, blown up with grenades in their homes and crushed to death by tanks while in cars.

He said: “They cut off limbs, cut their throats. Women were raped and killed in front of their children.

“Their tongues were pulled out only because their aggressor did not hear what they wanted to hear from them.

“Anyone who has given criminal orders and carried them out by killing our people will be brought before the tribunal which should be similar to the Nuremberg tribunals.”

Speaking of the atrocities uncovered in Bucha, Mr Zelensky told the UN: “Russia’s leadership feels like colonisers in ancient times. They need our wealth, our people.

Abducted “Russia has already deported hundreds of thousands of our citizens to their country. They abducted more than two thousand children.

“Russia wants to turn Ukraine into silent slaves. The Russian military are looting openly the cities and villages they have captured.

“They are stealing everything, starting with food and with earrings – gold earrings that are pulled out and covered with blood.”

Mr Zelensky added: “They are creating mass starvation. They even blow up shelters where civilians are hiding.”

One civilian, Irina Abramova, said of Russian troops who told her husband Oleg to kneel, then shot him in the head: “Their eyes were like ice. My husband was not a soldier. We told them we are civilians. But they were inhuman.”

Irina said she had begged the Russians to kill her too, but they refused.

Mr Zelensky said there was no difference between Russian forces and Islamic State terrorists and there was “not a single crime” they had not committed in Bucha.

He told world representatives: “The Russian military searched for and purposefully killed anyone who served our country. They shot and killed women outside their houses when they just tried to call someone who is alive.

“They killed entire families, adults and children, and they tried to burn the bodies. Speaking about Russia’s position on the Security Council, Mr Zelensky said: “We are dealing with a country that is turning its veto into a right to die.

“Ladies and gentlemen, are you willing to close the UN? No? Then you need to act immediately.”

Nato’s secretary general, Jens Stoltenberg, warned that Russia was regrouping its forces ready for the east and south of Ukraine.

He said further horrors might come to light as Moscow’s soldiers continue to pull back in the north of the country.

Mr Stoltenberg added: “When and if they withdraw their troops and Ukrainian troops take over, I’m afraid they will see more mass graves, more atrocities and more examples of war crimes.”